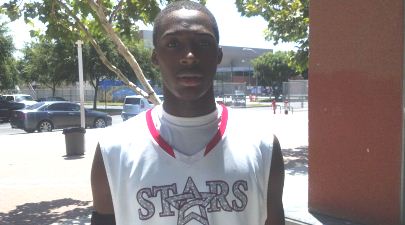 Weber State signee, Marcos De Niza HS 6-foot-4 senior guard Richaud Gittens had 21 points, 5 assists and 5 steals in a big win over Mesa Mountain View HS. His last steal and assist was the most important on the night, as he stole the ball with 9 seconds left and ran down the court and passed to 6-foot-4 senior guard Devin White for a lay-up to go up by 3 points late.
Share
Facebook Twitter LinkedIn WhatsApp Pinterest Email

Marcos De Niza High School 6-foot-4 senior wing Richaud Gittens significantly raised his play this spring and summer, and, as a result, saw his college recruitment soar.  After receiving strong interest from numerous schools this off-season, Gittens has made his college decision and elects for a program in the Big Sky Conference.

This week, after considering his options, Gittens gave a verbal commitment to Weber State and head coach Randy Raye and his basketball staff.  Weber State assistant coach Phil Beckner, an Arizona native and product of Buckeye High School himself, was instrumental in the recruitment of Gittens.  Beckner has done an excellent job in recruiting the state of Arizona, and continues to provide opportunities for Arizona's top prospects.

Gittens became one of the state's top prospects after strong performances this off-season on the club circuit while traveling with the Arizona Stars to numerous events across the country.  Very few prospects in the state helped themselves more than Gittens did throughout the off-season, as he went from an almost unknown prospect amongst college coaches during the high school season, to become one of the state's hottest prospects.

Gittens showed excellent athleticism and an ability to slash and produce in the open floor, while improving his shooting stroke.  A left-handed athletic talent, Gittens thrives in the open floor and finishes well above the rim and over defenders when he is at his best.  Still developing his perimeter shot, Gittens is a very good slasher and open court player with some upside as a prospect.

Look for Gittens to return this season and put up big numbers for himself and his team, while rising to become one of the state's best individual talents - regardless of class.

Congratulations to Gittens and his family on this amazing accomplishment from our Arizona Preps' staff.