Rhymes Puts On A Show In Big Road Win Over Mesa 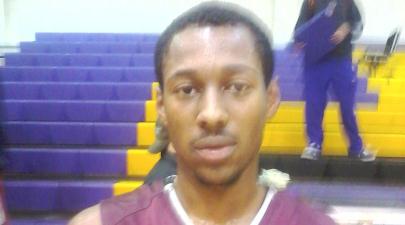 The game started off real slow, as both teams might have been a tad nervous for the “big game.”  Almost every player on both teams had attempted a shot and missed, until 5-foot-10 junior PG Rolando Rhymes made a 15-foot jumper for a 3 to 2 Mesa lead.  A quick steal by 5-foot-8 senior guard Zach Bullock and an assist to Rhymes for an “and 1,” then another steal by DM's 6-foot-6 junior center Mark Andrews and an assist from Rhymes back to Andrews for a lay-up would put DM up 9 to 3 - for an early lead with 3 minutes to go.

Finally Mesa's 6-foot junior SG Christian Harris would stop the bleeding with a runner off the backboard for a 9 to 5 DM lead.  After a few free-throws were made, a monster dunk would take place in the final seconds of the first quarter by 6-foot-10 junior center Isaac Allen, after a beautiful hand-off assist by 6-foot-4 sophomore PG Jalen Jenkins for an 11 to 8 DM lead.

The second quarter started off with a bang from another Isaac Allen dunk. Then two 3-point shots in a row by Rolando Rhymes, who usually doesn’t attempt 3-pointers.  Rhymes was “feeling it” from distance.

On the next possession, Isaac Allen came down and dunked the ball again and DM still holding on to a 17 to 14 lead.

Rolando would take the ball to the hole, but then Allen swatted it to the stands for an impressive block.  A few plays later, a steal and assist from Jenkins to 6-foot-1 senior guard DJ Henderson for an “and-1” - to tie it up at 17 all with 4 minutes left in the first half.

The Mesa defense would beg Rhymes to shoot another outside shot, even though he had already hit a few, but they didn't want him to penetrate the lane and kick it to a shooter or lay it in.  This would be the early strategy for Mesa HS head coach Shane Burcar and his staff.  Then Dan Richards threw a nice pass to Jalen Jenkins for a nice bucket to give Mesa back the lead - 19 to 17.

Desert Mountain's 5-foot-9 junior PG Gino Littles would convert 1 0f 2 free throws to cut it to a 19 to 18 Mesa lead with 2 minutes left.

On the next possession yet another huge block by Allen against DM's 6-foot-5 junior PF Jordan Higgins with 1 minute to go, and still a 19 to 18 Mesa lead.  Both teams would be plagued with extremely sloppy play with many turnovers in the last minute for a 19 to 18 Mesa lead at the half.

Isaac Allen had 7 points at the half for Mesa and Rhymes had 11 points for DM.

The strategy of limiting everyone else besides Rhymes was paying off for Mesa, since DM had only scored 18 points in the game.

The Desert Mountain defense was keeping them in the game.  It looked like DM head coach Todd Fazio's strategy was to limit the Mesa shooters and not double-team Allen.  We would look to see what strategy paid off in the end.

The third quarter started with many points going up in a hurry, as DJ Henderson would find Christian Harris open for a three-pointer for Mesa.

Then three lay-ups in a row by DM's Rhymes would tie it up at 22 with 6 minutes left to go in the third quarter.  One free-throw made by Andrews took the lead back for DM.

Henderson then would come down and drill a deep 3-pointer for himself - giving back Mesa a 25 to 23 lead.

On the next possession, DM's Brant Carter would hit a 3-pointer from a great feed by Gino Littles.  Mesa's Henderson again hit a deep 3-pointer for a 28 to 26 Mesa lead.

DM's Andrews then scored a lay-up on the other end from a nice feed by Bullock.  Magana then hit a lay-up for a 30 to 28 DM lead with 4 minutes left to go in the quarter.  Then an amazing feed from Rhymes to Higgins, and then a floater from Rolando Rhymes would give DM a 34 to 28 lead with 2 minutes to go.

Mesa would go ice cold from the field and DM would cash in on superb play from Rhymes.  Rhymes seemed to be taking over the game.

One free-throw by Mesa's 6-foot-6 junior forward Felipe Velazco, and then a few plays later a 3-ball by DM's 6-foot-3 junior SG Will Goff for a 37 to 29 DM lead - which would be the biggest lead of the night for either team.

On the next possession, Allen would make a hook shot for a 37 to 31 DM lead with 1:30 left in game.  Then Rhymes would make a video game-like crossover and rise up for a 15-foot jumper for a swish for a 39 to 31 lead with Velazco guarding him - getting the crowd screaming for “better defense.”

Then Jenkins would get to the hole with his extreme athleticism easily for a lay-up for a 39 to 33 DM lead at the end of the third quarter.

The final quarter would start with Jenkins throwing a great dime to Velazco for a lay-up, as DM would hold on to a four-point, 39 to 35 lead.  After three quick scores in a row by Mesa's DJ Henderson and Isaac Allen, Mesa would take back the lead at 41 to 40 with 4:45 left in the game.

Then we would enter the Rolando Rhymes show.  Rhymes would tie the game after a free-throw with 4 minutes left in the game.  Rhymes would then hit a 15-foot jumper to take the lead back for Desert Mountain, 43 to 41, in this seesaw affair.

Isaac Allen would convert a jump hook on the other end to tie it at 43 with 2:32 left, but Rhymes would score again for a 45 to 43 lead with 2:12 left in the game.  Rolando Rhymes was completely carying his team at this pouint in the game, and looked special doing it.  Rhymes then scored another lay-up for DM to make it a 47 to 43 DM lead with 1:30 left in the game.

Mesa would have 3 turnovers in a row, as they would struggle handling the pressure from the Wolves.  So Mesa would have to foul Rhymes, putting him on the free-throw line for a one-and-one attempt, but Rhymes would miss the first shot attempt.  Mesa would get the rebound and call a timeout with 1-minute left and a 47 to 43 DM lead.

Mesa's Jenkins tould take ball hard to his left and finish a lay-up to only be down by 2-points for a 47 to 45 DM lead with :34 seconds left to play.

Rolando Rhymes would get fouled again, but this time he would finish both free-throws for a 49 to 45 DM lead.

Mesa's Velazco then got fouled.  He would make both of his free-throws for an exciting 49 to 47 DM lead with :22 seconds left in the game.

DM's Andrews then got fouled, but he would miss the front end of the 1-and-1.  Mesa would rebound the basketball and call a timeout with :17 seconds left - down by 2-points with a 49 to 47 DM lead.

Rhymes smartly fouled Jenkins, since there was a “foul to give.”  Then with :10 seconds left in the game, Jenkins would pass the ball to Isaac Allen inside.  Allen would throw up a turn-around jump hook over a defender, only to miss the shot attempt.  DM's Mark Andrews would secure the rebound for a very impressive 49 to 47 victory for Desert Mountain on the road.

On a night where there were many talented division-I players on the floor - each of whom are getting recruited by many colleges, it was 5-foot-10 junior PG Rolando Rhymes who was the most sensational player on the court.  Rhymes outplayed everyone and let Mesa pay for “letting him score.”  Rhymes did in a big way with a game-high 28 points out of his team's total 49 points.  He also had 4 assists and 3 steals.

Isaac Allen led Mesa with 14 points, 10 rebounds and 4 blocks.  DJ Henderson also had 11 points for Mesa in the loss.

Looks like this time next week, Desert Mountain will be ranked #1 in the state.

Mesa is led by 6-foot SG David Cummard (very mature scorer at all 3-levels), who had 26 points, and 6-foot-3 PF Darius Goudeau (very long player) who had 10 points, 8 rebounds and scored a quick 5 points in the JV game.

6-foot-1 SG Kale Abbott is also an impressive shooter.  He had 22 points in the JV game.  Kale is a sophomore.

Mesa's freshman team is currently undefeated and Desert Mountain's freshman group has only lost two times - an overtime loss to Mesa Mountain View and now to Mesa in a close game by 3-points, 52-49.