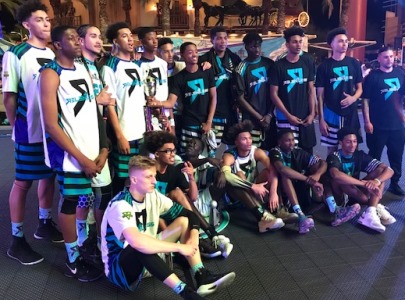 The 1st Annual 2018 Relentless Arizona High School All-American Game took place in amazing fashion on Friday, March 9th in the middle of the Westgate Entertainment District.  Arizona Preps' staff writer Justin Vargas), along with Kenny Dobbs and Gary Smith hosted the “March Madfest” while also launching their new Relentless Brand, which supports a belief in God, family and education.  The all-star game and a celebrity all-star game was played outside on an amazing $19,000 basketball court that was placed in the middle of the busiest restaurant/shopping/nightlife district on the West Side. The game was also played directly in front of Gila River Arena.

The All-Star game was held Friday evening with much of the state's top high school talent in participation for the game.  The game was very exciting, as each of the players were draped in Relentless athletic apparel, and competed in front of a large number of fans, with the event's contest hosted by world-recognized dunk artist and tournament organizer Kenny Dobbs.  With many top individual performers in the contest, Salpointe Catholic High School's 6-foot-5 junior wing Majok Deng would earn Most Valuable Player honors after finishing with better than 40 points in the contest.

The event was a first of it's kind, as the state has not had a true all-star game just after the season, and, especially, not a game that was held outside for spectators to witness.  While the event was free for spectators in the West Valley to observe, it created an amazing atmosphere for fans and onlookers to observe - creating a forum for Arizona's top prospects to showcase their talents.

This game, very different in it's overall format, which was very positive in it's essence, was a first for Arizona basketball players, fans and enthusiasts and took Arizona basketball to a new level.  The game was also organized by former Arizona high school basketball standouts, Dobbs and Gary Smith, and a celebrity game, which concluded the evening's festivities and included other top past Arizona high school products such as high-flying Michael Purdie.

It was very exciting to watch and gave spectators a glimpse into some of the state's top talent - proving just how good the state is becoming.

Looking forward to Saturday's day two of action, which will include the three-point contest and also a slam-dunk contest at the Tempe Marketplace from 4PM to 7PM.