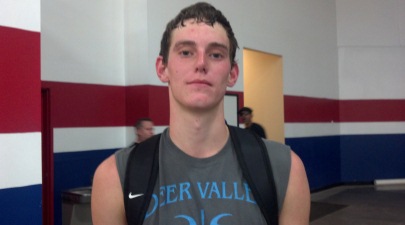 Deer Valley High School turned in a very good season for the program in 2012-2013, as the Skyhawks compiled a 20-8 overall record in the Division-I Class.  Head Coach Jed Dunn is one of the state's top young coaches and has done an excellent job of developing the players in the Deer Valley program.  One player that Dunn has to be excited about is talented 6-foot-4, 180-pound sophomore forward Rees Plummer.

While Dunn's Skyhawks will be losing a lot to graduation next year, the future still looks extremely bright for Deer Valley as their leading scorer and second leading rebounder will return next season.  Plummer is coming off an excellent sophomore season for himself and will look to raise his game and numbers a great deal next year.

Plummer came up big for Deer Valley this past high school season, averaging 11.7 points and 5.9 rebounds per/contest.  Plummer also shot 48% from the field.  His best two efforts on the season came against stiff Division-I competition, as he poured in a game-high 28 points in a big win over Pinnacle HS, and then scored another 28 points in a loss to top-rated Desert Mountain HS - excellent numbers for such a young forward prospect.

Plummer is a skilled 3/4 forward prospect that is able to play both forward positions on the floor.  His skill level allows him to play with his back to the basket and also to go out on the perimeter and make plays for himself as well.  Plummer is a mis-match for most opposing forwards, as he can score around the basket with a nice, left-handed touch and also shoot the basketball effectively from the perimeter with a quick release.  He is also able to put the basketball on the floor and make plays for himself and others - a nice attribute.  He is also a very good athlete for his size and gets off the floor well.  He is also a very good finisher around the paint and against bigger defenders.

As far as his future college recruitment, Plaummer's recruitment level will weigh heavily on just how much he continues to grow.  Either way, this young man looks headed for the division-I level in the future, as he has developed nicely over the past two years that I have seen him compete.  As he continues to mature physically and get stronger and with continued hard work, he will see his game progress a great deal.

Plummer now enters the 2013 club basketball season, where he will be playing for the Arizona Stars 16U team - a team that will be very talented with some of the state's better 2015 prospects.  This spring and summer will be very beneficial for Plummer, as the heightened competition he will face throughout the off-season should only help to make him a better player.

I will continue to follow the progress of Plummer over the next two years, and will follow his progress closely this spring and summer, as this young man as developed nicely into one of the state's better prospects in the 2015 class.