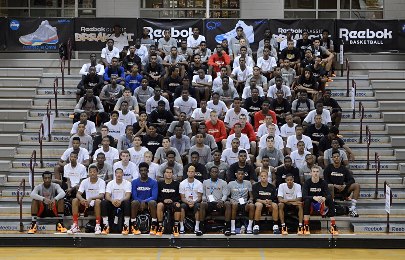 The annual Reebok Classic Breakout (Reebok All-American Camp) recently took place July 9-12 on the campus of Philadelphia University in Philadelphia, Pennsylvania.  A total of over 150 Division-I coaches over the 3-day period came to observe a majority of the top talent that the country has to offer.  This was my first time experiencing this event first-hand, and I was amazed at the level of talent in the gym. Of the players that I had personally watched throughout the week, here are my top overall performers from the event . . .

Rashad Vaughn  6-6  SR  Findley Prep (NV) - 2014:  In my opinion, Rashad was the best overall player in this camp and will not play in college for more than one year.  Rashad has legit NBA range on a silky smooth jump-shot that can extend out to 35 feet, as he hit about (4) 3-pointers in the All-star game that were a few steps inside of half court.  He also can score easily inside three-point distance, because he has a quick handle that allows him to get by his defender, and use his massive 6-6 athletic frame to score over, around, or through opposing defenses.  He also possesses a great mid-range game that very few players today have.  If he is cut off from the basket, he will just rise up over his defenders and knock down the shot at a high rate. He also has great defensive awareness on the court, as he picked off several passes and finished well above the rim on the other end.  Rashad announced at the camp that he will transferring to National powerhouse Findley Prep (NV) from Robbinsdale (MN) Cooper - a move that will set him up better for college, as he will be playing with the best players in the country, day in and day out.  Vaughn currently holds offers from Kentucky, Baylor, Kansas, UCLA, Minnesota, North Carolina and many other top national programs.

Emmanuel Mudiay  6-5  SR  Prime Prep Academy (TX) - 2014:  Emmanuel is another player, like Vaughn, who will not be staying long in college.  He is already projected as the #2 overall pick in the 2015 NBA Draft by NBADraft.net.  What stands out about Mudiay is his overall shiftiness, speed, and confidences when he has the basketball in his hands.  Despite being double-teamed a majority of the camp; he would still use a quick crossover/move to get away from the double-team, before he was unable to do anything with the basketball.  Once away from his defenders, he would either score the basketball with strong moves in the lane, pull up using his clean jump shot or hit an open player cutting or standing outside the three-point line.  His confidence is also a big part of his game.  His teammates seem to have 100% trust in him running the show, due to his very high basketball IQ - knowing that he was not just out to get his points, but he would also get them involved and do whatever it takes to win the game.  Mudiay is also one of the most athletic point guards that I have seen.  He put down a number of big-time dunks throughout the camp, and got a 360-dunk on a fast break in the all-star game.  If he develops a more consistent jump-shot past the 3-point line, he will be near close to impossible to guard.  Just some of the schools he currently holds offers from includes Arizona, Kansas, Baylor, Kentucky, SMU, Louisville, Oklahoma St. and St. Johns.

Devin Robinson  6-7  SR  Christchurch School (VA) - 2014:  Robinson was one of the best wings that I saw over the 3-day period.  He has a long, athletic frame and knows how to use his body to his advantage on the offensive and defensive end.  He is a good spot-up 3-point shooter, and can also create his own 3-point/mid-range shot off the dribble.  Robinson uses his overall length over other smaller defenders to get easy put-back dunks and points, and is able to score over other players once he is in the lane.  He also has a great motor and runs the floor very well to get easy transition dunks.  Robinson currently holds offers from such schools as UCONN, Florida St., Cincinnati, Georgia Tech, Notre Dame, USC, Indiana, Rutgers, Virginia Tech and many others.

Romelo Trimble  6-3  SR  Bishop O’Connell (MD) - 2014:  The University of Maryland commit was by far the smoothest shooting point guard that I saw in this camp.  His almost effortless jump-shot made it very easy for him to score throughout the entire camp and into the all-star game.  He hits most of his jumpers from behind the 3-point line after going behind the screen and pulling up or creating for himself off the dribble.  He also has a very good floater, which he uses to score over much bigger defenders once he is in the lane.  He also hits cutters once he is in the lane, or uses an in-and-out dribble to move the bigger, slower defender so he can score at the rim.  His body is ready for the college game now and Maryland got a steal with this PG.

Jared Nickens  6-6  SR  Westtown School (NJ) - 2014:  Nickens is another University of Maryland commit, and I can see why.  His game is very similar to that of current University of Maryland player Nick Faust.  Nickens runs the floor very well for a wing and gets easy buckets, and can also score in bunches from all over the floor.  He is a clean shooter from 25 feet and in.  He can also post up smaller guards and wings with his size and length, and uses a good floater or step-back to put the ball in the hole.  He also has a good, quick crossover to create a mid-range jumper for himself, which he hits at a very high rate.  When Faust leaves Maryland, Nickens will be a great player to step in and compete for his spot right away.

Josh Perkins  6-3  SR  Huntington Prep (WV) - 2014: While Perkins may not have the high-level athleticism that Mudiay and other guards have, he makes up for it by being one of the best passing point guards in the nation.  If anyone is remotely open near or around the basket, Perkins will find a way to get the ball to them, so they can finish with a dunk or layup.  He frankly sees things on the court that the other point guards just don’t see, and this makes him one of the best point guards in the country.  Besides his amazing passing ability, he also has a very tight, low handle that makes it easy for him to get by his defenders to score, or make a great pass to another teammate for them to score.  He also has a quick Austin-Rivers' like release on his jump shot that makes it easy for him to shoot the ball at a very high percentage when he decides to shoot the ball.  His overall feel for the game is very high, and he quite frankly makes the game look very easy and fun for his teammates and people watching in the stands.  Josh holds offers from such schools as Arizona, Colorado, UCONN, Gonzaga, Minnesota, New Mexico, UCLA and Stanford.  He is also receiving interest from such high major schools as Duke, Kansas and Kentucky. There have been rumors going around that Perkins and elite level shooting guard Rashad Vaughn will be attending the same college.  If these two link up, it could possibly make the best freshman backcourt for the 2014-2015 college basketball season.

Michael Humphrey  6-10  SR  Sunnyslope High (AZ) - 2014:  Humphrey came into the Reebok Classic Breakout as an unknown prospect and left as possibly the “sleeper of the camp.”  Humphrey is a long post prospect who has very versatile skills for his position.  He can drag his defender out to the 3-point line, where he shot the ball very well all weekend, or drive by his defender and finish strong above the rim.  He also caught many put-back dunks and alley-oops throughout the camp, due to his great length and quick bounce off the floor.  The thing that stood out to me the most about Humphrey is his shot-blocking ability.  Any shot taken by any player that came towards him was either altered or blocked with authority.  His defensive ability alone is what is turning him into one of the top center prospects on the West Coast, and made him arguably the best center at the camp.  Michael holds offers from such schools as UCLA, Texas, Oklahoma State, Iowa, Virginia, Washington State, Vanderbilt, Oregon, USC and Gonzaga, while Indiana, Arizona, Duke, Stanford, Georgia Tech, Miami, Nebraska, San Diego State, UNLV and Notre Dame also look to be nearing scholarship offers soon to the talented post prospect.

Jalen Lindsey  6-7  SR  Huntington Prep (WV) - 2014:  I felt that Lindsey was the 2nd best shooting guard at the camp - minus future first round pick Rashad Vaughn.  He is very athletic, like most of the wings, but what sets him apart is his very clean shooting ability.  He takes a lot of shots, but he also, when on, makes a lot as well.  He can shoot it well off the dribble, but is most effective off the spot-up, as he can rise over his defenders with his great lift on the shot.  Lindsey also scores very well in the lane with his long first step, which gets him by his defenders and right at the rim, where he will finish over or on his defenders.  His quick reflexes around the basket made it easy for him to get second-chance put-backs off missed shots by his teammates.  Lindsey will be a teammate with Josh Perkins next year at Huntington Prep, and will combine to make the best high school backcourt in the country.  Lindsey holds offers from such schools as Louisville, Memphis, Vanderbilt, Florida State, Georgia, Georgia Tech, Cincinnati, Tennessee, N.C. State and many other high major schools.

Derrick Jones  6-5  SR  Archbishop Carroll (DE) - 2014:  Jones was by far the most athletic player that I saw at the camp.  If Jones is within 10-feet of the basket, he is going to dunk the ball, regardless of who is in his way.  His offensive awareness also leads to him getting about 2 to 3 tip-dunks a game off missed shots.  He also has a good lefty stroke from the 3-point line that he mostly creates off the dribble.  He had about 6 dunks in the all-star game, and about two of them where on his defender who couldn’t do anything about it, as he rose over or on them.  Jones is a very special athlete and has a bright future ahead at the college ranks for the 2015-2016 season.  He holds offers from such schools as Kentucky, Syracuse, Maryland, Xavier, Villanova, St. Joes and Xavier, and will have many more by the end of the July evaluation period.