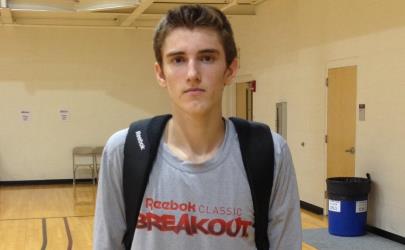 Day two of this year's Reebok Breakout Camp in Philly saw a lot more action taking place on the basketball court as each camp participant competed in three games on the day, with some training taking place in the morning.

Day two is always enjoyable to watch as a scout, because the players settle down from nerves and the coaches of the event begin to gain a better feel for who the players are on their respective teams - allowing for much better team play and better substitution patterns.  For each of Arizona's top prospects in the camp, this is a welcomed sight as players get their chance to prove what they can do amidst  so much top-rated competition.

On day two, Sunnyslope High School's talented and rapidly developing 6-foot-10 big man Michael Humphrey made a complete stamp on the camp, as he impressed everyone in attendance with his ability to play the game at a high level.  National scouts, media, college coaches and camp staff marveled at Humphrey's emergence at this year's camp.  In my almost 20 years of covering high school basketball in the state of Arizona, I have not seen many kids that have seen such a dramatic improvement in their college recruitment and overall reputation as a player in such a short time as Humphrey.  Humphrey is on his way to an all-star appearance in this year's camp - a fact that will change this young man's life forever.

On Thursday, Humphrey continued his exceptional play in the event - blocking or changing almost every shot in the paint, rebounding outside of his area, running the floor and finishing, playing extremely active and also showing perimeter skills that many did not know he had before this year's event.  In one evening game on the night, Humphrey had three consecutive offensive put-backs in three different trips up the floor - with two of the put-backs resulting in dunks.

Humphrey may now be the hottest player in this year's camp, and was regarded as the camp's top sleeper prospect by national scout Clark Francis (Hoop Scoop Online).  After Thursday's action at the event, Humphrey reeled in offers from Texas, Iowa and Oklahoma State.  Francis rated Humphrey as the #5 overall prospect in this year's camp Thursday evening.

Westview High School's talented 6-foot-9 senior power forward prospect Andre Adams, while playing with a strong group, has held his own and has impressed with his length and large upside as a player.  While Adams is not a finished product by any means, and still needs a lot of development as a player, his potential is glaring and he has shown up in every game in this year's camp.

Adams has been rated as the #3 overall power forward in the camp by Francis.

Westwind Prep Academy 6-foot-3 senor guard Tate De Laveaga (Northern Arizona commit) has quietly had a good camp for himself.  Playing on a very loaded team in the event, De Laveaga has played tough and showed superior competitiveness.  He has made shots, driven hard to the basket and finished strong and proved that he can play the point guard position for the full game against top-rated competition.  De Laveaga has proven to many in the event that Northern Arizona head coach Jack Murphy got an absolute steal with the tough guard prospect.  If not committed already, De Laveaga would be generating serious interest from this year's camp.

Desert Ridge HS 6-foot-2 senior guard Hunter Thomas settled down nicely on Thursday and played his best basketball of the event.  Thomas is a shifty guard prospect with loads of athletic talent and a high motor.  Playing alongside nationally ranked guard prospect Josh Perkins, Thomas has held his own in the camp and has proved that he can play at this level.  He has played all over the court in the event and looks to have taken his confidence level to a new level.  Thomas will be a different player when he returns home, as he has realized for himself that he belongs with the top prospects in the state.

Quote Of The Day:  The quote of the day came from national scout Clark Francis regarding the play of Sunnyslope's Michael Humphrey, when he had this to say about the evaluation of Humphrey's performance in this year's camp:  "Anything said about Humphrey in this year's camp would be an understatement."