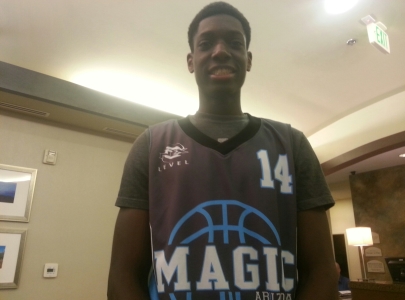 Westwind Prep's 6-foot-8, 215-pound prep forward prospect TK Edogi was one of the top emerging prospects in the West this spring, after strong performances in several West Coast exposure events.  After flying well below the recruiting radar for some time, the ultra-athletic power forward prospect has seen his college recruitment begin to soar as of late.

Recently, Edogi took several official recruiting visits and now he will look to possibly take two more recruiting visits in an attempt to make his college decision.  Edogi has already visited Niagara University, Wright State and Iona College in New York.  Both Niagara and Wright State have offered scholarships to him, while Iona is nearing an offer.

Edogi's club coach Kenny Mullins, with the Arizona Magic Elite, advised me that Edogi is very interested in Tulsa, and really likes the program, but is waiting to see if Tulsa head coach Danny Manning will extend him an offer.  An offer could come on the recruiting visit to the program.

A post-grad prospect, Edogi developed a great deal over the past year while playing against local junior college competition at Westwind, and under the leadership and direction of head coach Gabe Stephens.

Edogi had numerous games this season against junior college opposition, where he competed at a high level and put up strong individual statistics – helping the Westwind post-grad program to their best season since the school’s origination.

As a senior post at Valley Vista HS during the 2011-2012 high school basketball season, Edogi was among the most talented athletic talents in the class.  While seeing double-teams and very rarely seeing the basketball, Edogi’s high motor and explosive athleticism allowed for him to make plays and still be very productive.  As a result, Edogi had a strong high school season for himself and began to garner serious recruiting attention after the season came to an end.

A definite sleeper prospect, Edogi advised me that he is open to any college program at this point and is very excited about the opportunity to play at the next level.  He is in no rush to make a decision.

Edogi is already a full academic qualifier and has cleared the NCAA Clearinghouse.

Arizona Hoop Review Scouting Report:  Edogi is a high-wire, high-energy athletic talent that competes hard and attacks the rim with vigor.  He has explosive athleticism for his size and plays well above the rim – an excellent finisher.  One of the best dunkers in Arizona’s 2012 class.  Also a good rebounder on both ends of the floor, Edogi rebounds the basketball at it’s apex in the air and rebounds outside of his area very well.  He has solid low post moves and solid footwork, with a nice jump hook.  He does not mind physical contact and gets to the free-throw line quite often.  He is more of a mid-range shooter at this point in his young career, as he likes to score around the basket.  He will need to improve his range on his shot and become more consistent from behind the arc at the next level, but can be very effective, depending on the level he lands at collegiately.  He runs the floor exceptionally well and with great energy – creating easy scoring opportunities for himself on the offensive end of the floor.  He is a solid defender overall, and has much more success as a low post defender.  Needs to continue to focus on this area of his game to maximize his full potential, but he definitely has the lateral quickness and the athleticism to do so.  A very good looking sleeper prospect for any mid-major division-I program.