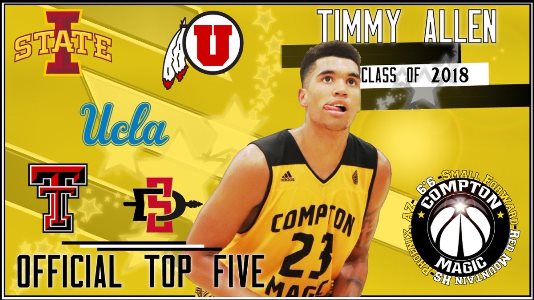 Red Mountain High School's  6-foot-6, 210-pound senior wing Timmy Allen is the state's top overall prospect in Arizona's 2018 class.  Allen is coming off a strong showing this spring and summer, and now has trimmed his recruiting list down to five schools.

After receiving numerous scholarship offers for himself over the past two years, and from numerous high-major programs, Allen has now cut his list down to five different college programs - setting himself up to schedule official visits for the fall to each of the five programs.

Allen is coming off a strong junior season for Red Mountain HS, after transferring from Desert Ridge HS.  While leading his team to an 18-9 overall record on the season, Allen averaged 19.8 points and 7.9 rebounds per/game.  Allen is regarded among the top overall 2018 prospects in the country.

Allen competed this club season with the Compton Magic program on the Adidas Gauntlet travel circuit.

Allen has not indicated a leader at this point in his recruitment, among the 5 schools, so it looks as though he will take his official recruiting visits before making his final decision.

We will continue to follow Allen's recruitment closely and bring you updates as they continue to develop.

Arizona Hoop Review Scouting Report:  Allen is a very skilled wing prospect with a superb overall feel for the game.  He is able to create shots for himself or others almost at will.  He is a very good scorer of the basketball, and is able to turn it on when he wants to offensively - capable of scoring inside and out and with ease.  He is very smooth and has a nice perimeter shooting stroke with range.  He is a very good ball handler and passer, making it very difficult for opposing teams to slow him down once he makes up his mind to get going.  Allen is also a very good rebounder with a very good body that allows him to gain good inside position for nice offensive put-backs and rebounds.  He gets a lot of his points in this manner, especially when you consider his long arms and wingspan that allows him to keep balls alive and extend past his opponents.  A good ball handler and passer.  Fundamentally sound. A very solid overall prospect that should benefit any team he plays for, as a result of his versatility and offensive soundness as a player.