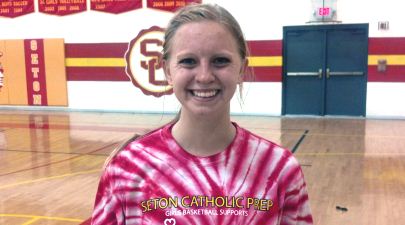 Arizona's 2013 senior class of girls prospects is loaded with talented players for college coaches to take a strong look at this season.  With numerous members of the class already signed with division-I programs, one player that is still on the recruiting board this high school season is 3-time defending state-champion Seton Catholic High School's 5-foot-8 senior guard prospect Anne Marie Holter.

Holter remains uncommitted during her senior season after three strong high school seasons under terrific high school head coach Karen Self.  A four-year member of the varsity team at Seton Catholic, Holter has helped lead her high school program to an amazing  three consecutive state championships in her high school career, and will attempt to run the table this season - her final high school season of her storied career.

Holter will have another excellent opportunity to lead her Seton Catholic team again to this year's Division-II state title, as the Sentinels are off to another excellent start this season, already compiling an 11-2 overall record this season.  Seton has already reeled in big wins this season over Hamilton HS, Salpointe Catholic, Saguaro HS, and, last week, handed Notre Dame Prep their first loss of the season in a big 56-45 win at home.  Currently, Seton Catholic is on a big win streak and has won their last 7 games on the season, with many in blowout fashion.

Holter is among the best unsigned targets in the state, and is a very underrated guard prospect that knows how to play the game at a high level - a big component for Seton's chances of winning it all again this season.

"She is huge for our program," said Karen Self.  "She does it all for us.  I don't know what we would do without her.  It will be very difficult for us next season when she is gone."

Holter is a true combo-guard prospect that loves to have the basketball in her hands, and is able to consistently make plays for herself or her teammates.  She plays with a high level of confidence and enjoys competition and the big game, where she excels in the clutch.

I caught up with Holter last week regarding her college recruitment and she surprised me with her response regarding her future decision on a college program - stating that she is not looking for a big school program to attend, but rather the right fit for herself - a fit that will most likely will include a smaller, academic college program for her future destination.

"I know I am not going to play professionally, so I am looking for the right college program," said Holter.  "One that has good academics and has a good team atmosphere."

Holter advised me that  currently she is receiving the most interest from such schools as Mercer College, the Colorado School of Mines, Colorado Mesa University and Benedictine College.  Holter stated that she plans to make her college decision this spring - during the late signing period, and is in no rush to make her decision.  Holter is worthy is much higher college recruitment, even though she does not relish it.

While being an excellent student off the court and a true vocal leader on the court, Holter is one college prospect that could have a long storied career after her high school days - on the basketball court or professionally in the career she chooses.  She has a high skill level on the basketball court and has the true grit that it takes to consistently be a champion.  This toughness as a player will suit her well in whatever she chooses to do in life.

Look for Holter to continue to lead her Seton Catholic HS program this season to a strong finish, once again, and finish off a terrific Arizona high school basketball career.  Also look for Holter to make a jump in our next Fall/Winter Player Rankings for Arizona 2013 Class of girls prospects - soon to be released next week.