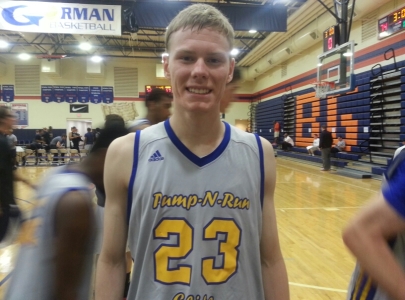 While competing with an out-of-state club team this past spring and summer, the Double Pump All-Stars (CA), Jones seemed to help improve his recruiting stock, as his team won a lot of games during the evaluation periods - including this year's  Double Pump Spring Classic in Las Vegas.  While playing alongside a loaded team of college prospects, Jones was a good contributor for the team, as he shot the basketball in fine fashion and showed his consistent ability to make plays off the dribble for himself and others as well.

Jones also had an excellent junior season last year, where he led his Gilbert Christian HS program to their third consecutive state title - finishing with an impressive 30-3 record on the season.  Jones was big for the Knights as he averaged 18.5 points and 6.5 rebounds per/game this past season.

Jones is a rare find - a prospect with size and a pure shooting stroke.  While he is very thin physically, he knows how to play the game and plays strong on the basketball floor, although added physical size will be a major key to his future success at the collegiate level.

Jones looks to be headed for a fall decision.  Arizona Preps will continue to follow the recruitment of Jones closely and bring you any updates as they continue to develop.

Arizona Hoop Review Scouting Report:  Jones has good height, length and an ability to shoot the basketball with consistency and range.  Jones is among the best pure shooters of the basketball in the state – regardless of class.  His size and length make him much more attractive than most shooters, since he is able to get his shot off easily over smaller defenders and moves very well with or without the basketball in his hands.  Knocks down big shots and is a clutch shooter.  Handles the basketball very well for his size and is a fundamentally sound prospect that has a very good feel for the game.  As he continues to get stronger physically he will really see his game progress off the dribble, but he is a good finisher now that finishes well over bigger defenders with a variety of floaters and runners.  An active rebounder and a good team defender that needs to continue to focus more defensively to reach his full potential.  As this area of his game continues to progress, he will become a much better and well-rounded prospect.