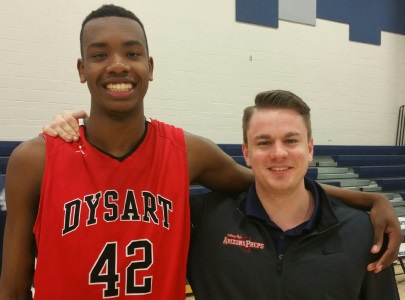 The majority of Arizona's top prospects in the 2016 class are now off the recruiting board, but one top-rated prospect, while receiving loads of college interest currently, has decided to go the prep school route for next fall.  While he is still undecided as to which prep school he will attend, Dysart High School's 6-foot-10 senior post Malik Ondigo has really impressed this spring during the NCAA Evaluation Period.

Ondigo has blossomed this spring, after a spring and summer (2015) last year where he struggled somewhat due to tendinitis in his knees, as a result of his immense physical growth.  Last club season, Ondigo struggled running the floor like normal and did not have his normal lift off the ground.  This club season, now much more athletic and active around the post, and able to run the floor like his normal self, Ondigo has looked extremely impressive.

Ondigo has come up big this spring.  First leading his Arizona Power-Factory ballclub to a runner-up finish in the Southwest Showcase Main Event, and then playing very well during the Spring Evaluation Period.  As a result, Ondigo has began to generate much more college recruiting interest from college coache - forcing Ondigo to mull over his options for next fall; whether to go to accept a scholarship offers or to go to prep school for a post graduate year.

Since the beginning, Ondigo has planned to take a post-graduate year next fall to develop much more physically and to catch up in age.  Still only 17 years of age, a post graduate year would do Ondigo very well, as he could mature much more physically and also mentally for the collegiate level - a perfect reason for a post-grad year and the true reason the NCAA allows for such a possible action.

This spring, Ondigo has received serious interest from such college programs as Washington State, as numerous schools have even kicked around the idea of red-shirting Ondigo for the fall of 2016, rather than him goingto prep school and blowing up from a recruiting standpoint - making it much more difficult to recruit and land him in the future.  Ondigo currently has offers on the table from UTEP and Cal Poly.  He is also still receiving strong interest from Stanford, Arizona State, Wyoming, Santa Clara, Grand Canyon, Northern Arizona, Southern Utah, Weber State and San Jose State.

Ondigo has considered such prep schools as Hillcrest Academy locally, IMG in Florida, and also Brewster Academy (MA) as possible suitors for himself next fall.  If he does decide to do a post-graduiate year, many more scholarship offers will begin pouring in for the developing post prospect over the next year.

Post players often take a much longer time to develop as college prospects, and as a result, I always have to project where a student-athlete will land over time.  A post talent such as Ondigo projects extremely well, since he has excellent length and is still growing.  His length and athleticism are attractive and his work ethic is as well.  Ondigo has the body and early skillset that suggests that he will only continue to develop a great deal - becoming a strong recruiting target in the future.

We will continue to follow Ondigo's decision, whether to do a post-grduate year or accept a college scholarship very closely, and bring you any updates as they continue to develop.