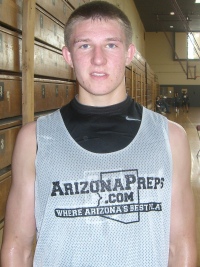 Braun is coming off an excellent junior season in which he led his Boulder Creek team to a 20-7 overall record on the season.

Braun averaged a team-high in points and rebounds - averaging 18.5 points and 9.4 rebounds per/game, while playing almost every position on the floor for head coach Randy Walker.

I caught up with Braun this weekend while his club program, the Arizona Aces, competed in the Area Codes Easter Classic, and Braun informed me that he currently has five offers on the table with many other schools looking to get involved.

Braun told me that he currently holds scholarship offers from New Mexico State, the University of San Diego, Northern Colorado, Weber State and Grand Canyon University.  He also told me that UC-Irvine could be reaching an offer with him very soon.  He also advised me that he has heard from numerous other mid-major programs, and that many schools advised him that they are looking to forward to watching him this off-season.

In this weekend's event, Braun proved just how deadly he can be as he led his Aces program to a big win over the Compton Magic Elite in the event - a game in which Braun performed very well.

Braun is a very nice talent that should generate a lot of interest this spring and summer.  His ability to compete, shoot the basketball and make plays makes him very attractive to college programs.  He also has excellent toughness as a player and is well battle tested.

Braun will team up with other top-rated 2013 prospect Joe Boyd this spring and summer on the Aces, and look to raise his recruiting stock with strong performances on the AAU/club circuit.

I will continue to follow Braun's recruitment closely this off-season, and bring you updates as they continue to develop.

Arizona Hoop Review Scouting Report:  Braun is a tough prospect with good athleticism and a great knack for the ball.  Braun has a very good physical build with excellent toughness.  He has a very nice shooting stroke that he shoots with very good confidence and nice range.  Braun can also get his own shot off the dribble and make plays for himself or others.  He is also a good scorer around the painted area of the floor, as he does not mind physical contact and gets to the free throw line.  A very good ballhandler that is capable of playing either guard position on the floor, but is at his best from the shooting guard position where he can score the basketball.  A very good rebounder with a good wingspan.  A good defender.  Possesses excellent work ethic and has good passion for the game.  Has a bright future ahead of him depending on what level he lands at.  Among the best well-rounded basketball prospects in Arizona - regardless of class.