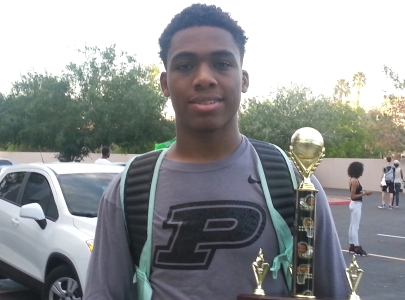 There are still some very good prospects still available in the state of Arizona's 2016 class - unsigned for the spring signing period.  One of the top prospects still availble this spring is Shadow Mountain High School's athletic and talented 6-foot-3, 190-pound senior guard JJ Rhymes.

Rhymes finished off a stellar high school career this high school season with his second Division-II state title for Shadow Mountain, and was also selected as the Player of the Year for the division this season - an impressive honor.  Rhymes led Shadow Mountain to a 27-5 overall record on the season, and his team only had one loss to an Arizona high school team in the process.

Rhymes averaged 19 points and 6.4 rebounds this high school season.  Rhymes also had a strong junior season while leading his Matadors to a nice 23-7 overall record, while averaging 21.2 points and 6.9 rebounds per/game.

Rhymes advised me that he will make his college decision within the next week between these three schools.  Rhymes stated that he is looking for playing time, and a lot of it, from the school he chooses.

Arizona Preps will follow this recruitment closely and bring you an update as soon it develops.

Rhymes is among the very best available prospects in Arizona's 2016 class, and had a terrific high school career.  He helped to bring a lot of respect to the state of Arizona throughout his high school and club basketball career.  Rhymes played for Team Bibby and was very successful on the club circuit.

Arizona Hoop Review Scouting Report:  Rhymes is an athletic guard prospect with a nice motor and a strong ability to score basketball off of slashing drives to the basket.  He has very good body control and finishes effectively against bigger defenders.  Plays much bigger than his size suggests.  An excellent finisher and open court player.  Has a good shooting stroke with range.  His left-handed prowess makes him difficult to defend for opposing defenders.  A strong rebounder.  Excellent defender with very good quickness of feet and hands.  Good ball handler.  Solid passer.  A very good overall guard prospect for a mid-major program.