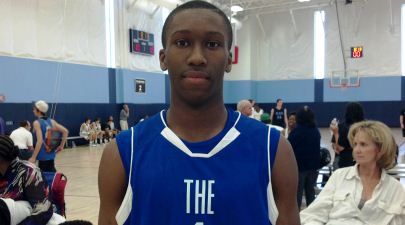 Basha High School's 6-foot-5 junior guard Jaron Hopkins is a big-time talent and among the very elite prospects in the state of Arizona - regardless of class.  In fact, Hopkins is currently rated as our #1 overall prospect in Arizona's talented 2013 class.

Hopkins is fresh off leading his club program, The Magic (affiliated with California's Compton Magic), to a runner-up finish this past weekend in the Southwest Showcase Main Event - an event in which Hopkins played very well.

I caught up with Hopkins and his father Brian Hopkins this weekend, and they informed me that Hopkins currently has 8 different division-I offers on the table for himself.

Thus far in his early recruitment Hopkins has offers on the table from Colorado, Auburn, Penn State, Penn, Washington State, Boise State, San Francisco and Colorado State.  Look for many more offers to continue to pour in for Hopkins as the spring and summer continue to develop.

"I really like the idea of Stanford," said Brian Hopkins.  "He will have to make his own decision though.  I am not going to tell him (Jaron) where to go."

Hopkins had a very strong junior season this past year for Basha HS - leading his team to a 22-7 overall record on the season, before falling at the hands of Perry HS (68-67) in a narrow but major upset loss.  Hopkins turned in very impressive numbers this season, averaging a team-high 21.8 points,  7 rebounds, 6 assists and 5.3 steals per/game.

Arizona's 2013 class of junior prospects is loaded with talent. In fact it looks to be the best recruiting class in the state of Arizona since 2007.

While the class looks to be very strong, no player in the class has improved over the past two years of high school basketball more than Hopkins.

Hopkins has grown significantly over a short period of time - both physically and mentally, and, as a result, has seen his game and college recruitment begin to soar.

Just a short period ago, Hopkins was just barely 6-0 tall and a pure point guard prospect as an eigth grader. Just two years later, Hopkins now stands a full 6-5 in heigth (and still growing) and is a legitimate combo-guard prospect that is capable of handling the point guard position, while also being able to score the basketball at a high rate from the off-guard position with superior athleticism.

Just two short years ago, Hopkins also stood in the shadows of his cousin and teammate - 6-foot-8 junior Torren Jones.  Now two years later, Hopkins is a much hotter prospect than Jones, and quickly climbing the national recruiting rankings.

Look for Hopkins to continue to raise his recruiting stock this spring and summer, and become the hottest college prospects in Arizona's very talented 2013 recruiting class.

Arizona Hoop Review Scouting Report:  Hopkins is a very talented combo-guard prospect with a variety of offensive skillsets and superb athletic talent.  He has very good size physically, which allows for him to play both guard positions on the floor legitimately - an attractive feature.  Hopkins also has excellent upside as a player, since he is still growing a great deal.  As a point guard prospect, Hopkins has a very good handle of the basketball and a nice feel for the game.  He is able to create shots for himself or others, and is a good slasher and finisher in the open floor.  Also a good finisher in traffic and over bigger defenders.  Sees the floor and is capable of setting up his teammates, although he does need improvement in this area to reach his full potential.  A very good mid-range shooter, but still needs continued improvement in his consistency on his jump shot with range to reach his full potential as a player.  Very good defender with good anticipation that likes to play the passing lanes.  An active rebounder.  Has excellent potential and a very bright future ahead of him.