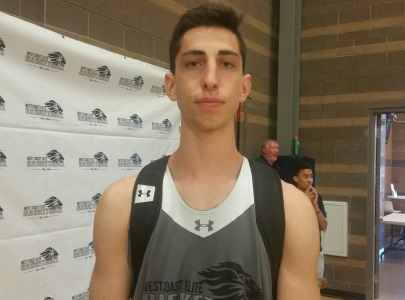 One of the top available prospects in the state of Arizona's 2017 class is Mountain Ridge High School's 6-foot-7 senior forward Jared Rodriguez.  A very athletic wing prospect with good length and a very versatile skillset, Rodriguez has not seen his college recruitment take off as of yet.  I caught up with Rodriguez recently, and he advised me that he will wait until the spring to make a college decision.

Currently, Rodriguez has scholarship offers from the University of Idaho, Dixie State and Chico State.  With only one division-I offer on the table for himself, Rodriguez had considered committing to a college program in the spring.  After not seeing his college recruitment by more schools pick up in the fall, the opportunity to wait until the spring intrigued Rodriguez enough to cause him to wait late.

Rodriguez has excellent potential as a college prospect.  He has a long, frame that he has added some serious size and muscle to over the last year.  He is fundamentally sound and possesses a good very nice shooting stroke with range.  He also has a good handle of the  basketball.

With continued hard work, on and off the basketball court, Rodriguez could become a major sleeper prospect for the spring.  Rodriguez could see his college recruitment jump up to the mid-major division-I level by next spring.

This high school season, Rodriguez should also put up big numbers as he will look to lead his high school program, since stud underclassman prospect Josh Green is playing for Hillcrest Prep Academy.  Look for Rodriguez to have major production this season.

I will be keeping a close eye on Jared Rodriguez this high school season, and look for him to blossom in the near future.