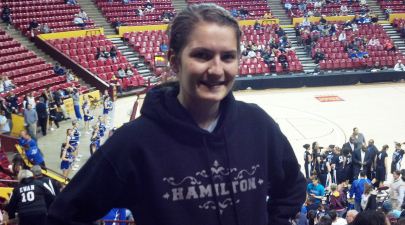 While no one had expected to see the Hamilton girls in this year's Division-I state campionship game, the Huskies would finish the season with a strong 27-7 overall record.

Hamilton's girls were very talented with gifted prospects and were led by the play of 5-foot-11 senior guard/forward Cassidee Ranger.  Ranger, a strong shooter of the basketball, would catch fire late in the season - pouring in three-pointers for her team as they made their exciting playoff run.  Known as "Bucketz" by her friends and teammates, Ranger is among the best pure shooters of the basketball in the state.

Ranger is looking to compete in the NCAA's High School 3-Point Championships on April 1st in New Orleans.

Arizona Preps caught up with Ranger recently during this year's state playoffs to ask her about her college recruitment, and she was a joy to interview.

Ranger advised me that she is currently hearing from numerous smaller schools, including Stonybrook, Marymount University, Lincoln Memorial, Oregon Pacific, Cornell in Iowa, and St. Francis.

Ranger said that she does not have a clear leader at this time in her recruitment, and that she was hopeful to land a serious offer in the near future, although she is very interested in playing for a smaller program, unless a bigger school steps up with an opportunity for her.

Ranger is capable of playing at the division-I level, as she is a fundamentally sound prospect with an excellent feel for the game and, of course, a strong shooting stroke.  She is a very good passer and a likes to get the basketball to the open player on the floor, while also being able to handle the basketball in the open court.  She does need to improve her ability off the dribble, but she is capable of creating her own shot and will only continue to improve in this area over time.

Ranger is a very good tema defender and is capable of playing good one-on-one defense with solid lateral quickness.  She will not hurt any team, as she plays with good intensity on the floor and is a winner.  While she played as a 3/4 for Hamilton HS head coach Jeff Kain, she will see her time on the floor collegiately as a 2/3.

Ranger is definitely one of the better sleeper prospects in Arizona's talented 2012 senior class, and will make a program happy.

Arizona Preps will continue to follow Ranger's recruitment closely, and bring you any updates as they continue to develop.