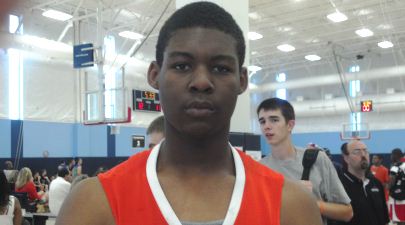 With the 2014 class in Arizona already looking to become the state's best class of prospects ever, as the class is absolutely loaded with high-major division-I talent, Jones is among the highest regarded prospects among the loaded list of rising junior prospects.

Jones is coming off a very strong sophomore season for himself - leading his Millennium HS team to a 13-12 overall record, and doing his part on the season, averaging a team-high 19 points and 12 rebounds per/game.   Jones turned in very big numbers as a mere sophomore prospect that has developed a great deal in a short amount of time, and still possessing a lot of upside for the future.

Jones blew up last fall while attending the Fullcourtpress Freshman/Sophomore All-American Camp in California, where he was selected among the top 20 performers from the camp, and was regarded among the elite overall post prospects in the event.  As a result, Jones has  received serious attention from many high-major division-I college programs across the country.

I caught up with Jones recently and he informed me that he is hearing from many division-I college programs, including Marquette, Georgetown, San Diego State, San Francisco, UC-Santa Barbara, UC Irvine, UC-Davis, Boise State and Grand Canyon University.  Jones stated that he currently holds offers from San Francisco and UC-Santa Barbara.  Jones advised me that he does nothave a clear leader in his college recruitment at this time, but that he really likes Ohio State as a potential future college program for himself.  When asked why, Jones advised me that he likes their style of play and just simply likes their program.

Jones advised me that he is in no rush to make a decision, but that if the right opportunity arises then he will move on it.

Jones has competed this spring with the Compton Magic out of Southern California, and will continue to travel with the program this summer.

Look for Jones to continue to receive strong division-I interest from high-major college programs across the country, while being regarded among the top post prospects in America among the 2014 class.

Arizona Hoop Review Scouting Report:  Jones is a nice-looking young post prospect that is still developing a great deal but is developing nicely for his size and age.  Still a bit raw physically and also still growing into his large body, Jones is not real athletic at this point but has excellent length and size, which allows him to get good inside post position.  As a result of his left-handed shooting touch, Jones is able to score effectively around the basket and also shoot the basketball out to 15 feet, although he still needs time in the gym to become consistent from the perimeter, while also needing time to develop his low post footwork and skills aaround the basket.  But he still has a lot of time to develop and should a great deal before entering the collegiate ranks.  He is a very good offensive rebounder and finisher around the basket at this early stage, and possesses a nice left-handed jump hook.  He does not mind physical contact, but is still not physical in his approach to the game due to his youth.  As he matures, look for him to gain a much more physical approach to the game.  He is a good passer already and looks for the open man on the floor.  He is also a very capable shotblocker, as a result of his nice length - blocking or altering many shots in his area.  Jones runs the floor well for his size, but looks a bit unorthodox still overall as an athlete and takes small steps rather than running fluid.  This should change over time with maturity physically and mentally.  A nice young post prospect with very good upside.