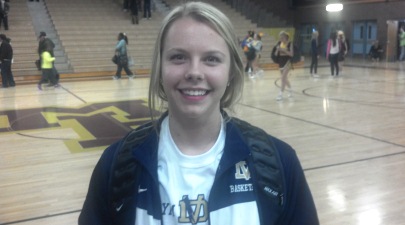 Arizona's 2014 class of prospects is a solid class of players for college programs to take a strong look at.  One of the top prospects in the class is Desert Vista High School's talented 5-foot-7 junior point guard Emily Wolph.

After a strong sophomore season and a strong spring and summer on the club circuit, Wolph has emerged as one of the top overall prospects in the class.

This season, Wolph has helped lead her Desert Vista HS team to a 12-7 overall record thus far this season, while averaging 13.7 points, 2.6 assists and 3 steals per/contest.  Wolph had a high scoring game this season of 29 points in a big blowout win over Marcos De Niza HS.

Recently, Wolph suffered an ankle injury, causing her to miss several games, but the heady point guard prospect will look to return soon for her team - a very talented group that will battle for the Division-I Class state championship this season.

I caught up with Wolph recently and she advised me that she is currently hearing from numerous college programs already for her services at the next level.  Wolph told me that such programs as Santa Clara, Loyola Marymount, Princeton, San Francisco and Northern Arizona have each shown the most interest in her as a prospect thus far.

Wolph also advised me that Santa Clara is her only scholarship offer thus far, but that other schools could offer her in the near future.  When asked if she had a clear leader at this point in her young career, Wolph told me that she currently likes Santa Clara and Loyola Marymount as her two early favorites.

Wolph is a heady floor general prospect with good overall toughness as a player.  She is a slick ball handler with excellent quickness that pushes the basketball up the floor to the open teammate.  She sees the floor very well and makes her team go, as she is an aggressive point guard that puts maximum pressure on opposing defenses - enjoying getting into the lane and finishing plays over bigger defenders.  She is at her best scoring the basketball, as she is a good shooter of the basketball with very good range on her shot from three-point distance.