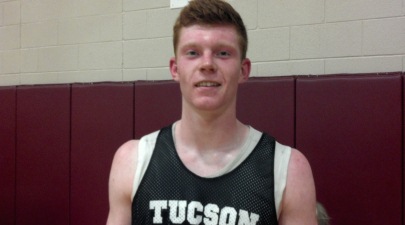 Denny is coming off a very good senior campaign, where he turned in his biggest and best season of his high school career - leading Salpointe to a 24-8 overall record on the season, and the quarterfinals of the Division-II state playoffs.  Salpointe would eventually lose to Arcadia HS (80-67) at Wells Fargo Arena.

Denny was impressive this season, as he showcased his ability to play on the perimeter as well as on the low block.  In the post, Denny was able to overpower low post opposition with his strong body and athleticism.  What was most impressive was that he showed a developed perimeter game and an ability to make plays off the dribble and get to the basket, where he is a strong finisher.

As a result, Denny has been hearing from numerous college programs as of late from many different levels.

I caught up with Denny this weekend, while participated with his club team, the Tucson Heat, in last weekend's Area Codes Easter Classic.  Denny advised me that he is currently hearing from numerous junior colleges and smaller college programs.  He has also heard from Cal-State Northridge and Colgate as of late, and plans to set up visits to both schools in the near future.

Arizona Preps will continue to follow Denny's recruitment closely this spring and bring you any updates as they continue to develop.

Arizona Hoop Review Scouting Report:  Denny is a very nice looking physical specimen with a college-ready body.  His strong, physical build allows him to play inside and out, where he is able to overpower most post players around the basket.  He is athletic enough to finish strong around the basket, where he is able to take physical contact and finish plays.  He has also developed his perimeter skills over the past year, and has shown an improved ability to play on the perimeter and shoot the basketball with range, although he is at his best from mid-range.  He is a capable ball handler in the open floor, but is at his best in the halfcourt set where he has improved his mid-range game.  A strong rebounder on both ends of the floor.  A good defender that plays with good intensity.  Runs the floor hard.  Has a great attitude and is a very good teammate with very good work ethic.