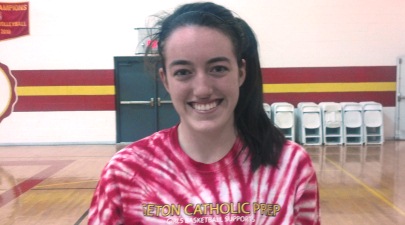 Arizona's 2014 class of girls prospects is loaded with talent, although many of the names are not household names, as of yet.  While the 2013 class of prospects was absolutely loaded with division-I talent, the 2014 class is still defining itself for college programs.

In our last summer player rankings, Barcello checked in as our #2 overall prospect in the class - a very high ranking for a prospect that is still only 16 years of age, and also still has a lot of room for growth as a player.

After helping lead her Seton Catholic team to their third consecutive state championship last season as a sophomore, Barcello has returned this season in a big way - helping Seton Catholic to an 11-2 overall record thus far this season, and winners of their last 7 games in a row.

I caught up with Barcello recently and she advised me that she is currently receiving interest from numerous college programs, but that she is hearing the most from Arizona State, San Diego, Colorado, UC-Santa Barbara and Princeton.

Barcello also informed me that, while she does not have a clear leader at this point in her young career, she is looking for a basketball program with a good coach and good academics.

Barcello is a strong low post prospect that enjoys playing inside the paint and is a good finisher around the basket.  She has worked hard on her offensive skills away from the basket, and has now developed a soft touch from the perimeter out to 18 feet, although she is at her best from mid-range and on the low block.  She is a crafty offensive threat with good footwork and a high basketball IQ.  She is a strong rebounder on both ends of the floor and does not mind physical contact.  She competes hard and enjoys doing the dirty work that it takes to help her team win basketball games.

Barcello is also a very good passer and does not force shots often - a compliment to the veteran leadership of Seton Catholic head coach Karen Self.  Also a good defensive player that is capable of either guarding post players or players on the wing, although she will need to continue to develop her footspeed for the collegiate level to defend quicker players on the wing.  Barcello is a well-coached talent and a strong team player that enjoys the game and is a winner.

Barcello also advised me that while she played in the past with the Arizona Elite, she is still unclear as to which club program she will play for after the high school season.

Arizona Preps will be keeping a close eye on Barcello the remainder of this high school season, as she looks to lead her Seton Catholic team to an amazing fourth consecutive state championship.