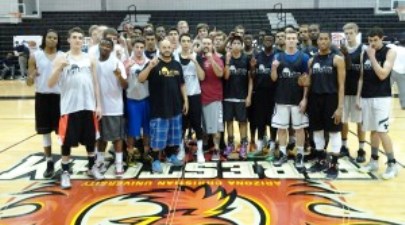 Also a special thanks to one of the top national college scouts in the country for attending Jerry Mullen of Mullensports.net who also runs several events that attract hundreds of college coaches during the NCAA evaluation live period.

Also coverage by Chad Groth (myself) Area Codes Basketball Scouting Service in which a full report of all prospects are included in my Arizona Spring Exposure Showcase report that gets sent to over 300 college coaches and scouts across the country.  Gregg Rosenberg of Arizonavarsity.com and the rivals.com network.  Jeff Meadows of Hoopsreport.com for his efforts in helping promote and cover this event. Rylan Whittaker of Vegaspremierball.com for his support as well.  Not many other events in Arizona give the opportunity that is showcased by Area Codes Basketball.

Reebok Grassroots executive Rob Engemann also stopped into Phoenix on Sunday to watch the Arizona Spring Exposure Showcase to support this event and see what talent was in the building.

Now lets break down the 2014 prospects from the Arizona Spring Exposure Showcase.

Zach Green (Mesquite) – The 6 foot 4 Green is highly skilled and athletic, has tools to get it done on defense and scores from all over, DI prospect that has options and bouncy on the break.

Colton Chambers (Westwind Prep) – Chambers impressed us with his shooting ability and rebounds well on both ends, solid DI prospect at 6 foot 9.

Gavin Wood (Florence) – Can really shoot the ball and gets his shot off in the lane, good basketball IQ and has a chance to play division I, skilled and at 6 foot 3 won’t hurt a chance to give him a look.

Parker Anderson (Queen Creek) – Impressed scouts with his size and length, 6 foot 6, long and wiry with a mid-range game.

Westen Ziegler (Round Valley) – Puts up buckets in a hurry, can play low major in the right system, works hard at 6 foot 4 also defends very well.

Keaton Ranger (Gilbert Christian) – Good size for a guard, the 6 foot 3 shooting guard can get his shot off the dribble.

Sam Pascua (Murray – Utah) – Solid shooting guard at 6 foot 5 and can score inside and out, one to watch in the live period if not already signed and can play division I.

Jacob Bowman (Washington) – Has great size and length, 6 foot 6 and plays the shooting guard, can score and has DI potential, great attitude on the floor, works hard and has bounce.

Cameron Pinches (North Pointe Prep) – A name that made a name, scores well and can attack the basket, the 6 foot 1 combo also has a few steals.

Dalton Groenewold (Catalina Foothills) – Does several thing well on the floor, the 6 foot 6 wing has a chance.

Khalid Muhammad (La Joya) – The crafty and fast guard has good size at 6 foot 1 and attacks the rim.

Lance Martin (Kingman Academy) – Nice shooting touch and has size at 6 foot 4 can really attack the rim and scores well.

Jaysen Ahasteen (St. Michael’s) – The 5 foot 10 guard can handle the ball, good defender and plays hard, good get for a DII.

Antonio Love (Central) – Bouncy and good strength at 6 foot 3 can play physical and finish in traffic.

Joseph Orozco (Tolleson) – Can score the ball with a long range jumper, at 6 foot 2 once scored 61 points in a high school game this season, JUCO prospect is getting lots of looks.

Robert Santos (Coronado) – Liked his work ethic and at 6 foot 2 has a chance.

Keith Jones (La Joya) – Played well in both showcase games at 5 foot 11 can play the combo with ease.

Blake Williams (Queen Creek) – Solid playmaker and basketball IQ, at 6 foot 1 can score off the dribble, deserves a chance.

Montrell Johnson (Precision) – Handles well for his size at 6 foot 2 and has good athleticism.

Junior Ramirez (La Joya) – Long and can get to the rim, 6 foot 2 guard that can hit the pull up jumper.