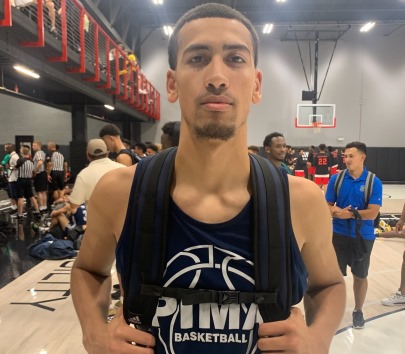 As we near the early NCAA signing period or "Fall Signing Period," scheduled for November 13th and running until November 20th, the top returning prospect in the ACCAC this season is now off the recruting boiard, as Pima Junior College 6-foot-5, 190-pound sophomore guard Rashad Smith has given his verbal commitment to Grand Canyon University and Head Coach Dan Majerle and his coaching staff.

Smith is regarded by our staff as the top returning sophomore prospect in the ACCAC this season, after turning in a very strong freshman season for himself last season and the Pima JC basketball program. Smith led his Aztecs to a 29-7 overall record last season and the ACCAC's Division-II Conference Championship, while averaging 13 points, 5 assists and 6 rebounds per/game.

As a result of Smith's potential as a player and the potential for him to gain loads of exposure to college programs this junior college season, Grand Canyon decided to turn up their recruitment of Smith - helping them land the juco guard prospect.

A graduate of Hamilton High School in Chandler, AZ, Smith received a huge offer from DePaul University late as a senior, but failed to qualify academically and decided to go the juco route to improve his academics and also to expand his college recruitment. His commitment to Grand Canyon is an excellent accomplishment for Smith.

Smith will look to lead a very talented Pima JC ballclub again this season, as they look to repeat again as D-II Conference Champs. Pima will host Lee College (TX) and Howard College (TX) on November 14th and 16th in their own tournament.

Arizona Hoop Review Scouting Report:  Smith is a bigger guard prospect that is able to play both guard positions on the floor, but is at his best as a scorer.  He is a good shooter with range on his shot, and a nice ability to make plays off the dribble for himself and others.  He has an excellent handle of the basketball and is a very good slasher and finisher in the open court.  He pushes the ball up the floor to the open man, and also enjoys having the basketball in his hands.  He has good overall size and a quick release on his shot.  A good athlete.  An active rebounder, but needs to continue to focus on this area of his game, which should progress nicely over time.  A good on-the-ball defender that also plays passing lanes.  Has upside as a player.  A good overall guard prospect for the mid-major level, with very good potential for the future.