Rashaad Goolsby Is On The Rise @ Chavez 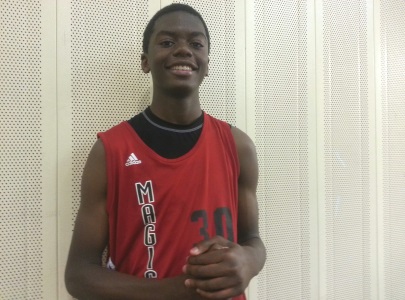 Cesar Chavez HS 6-foot-6 rising junior forward Rashaad Goolsby has excellent potential as a young prospect. Chavez has been one of the state's elite programs over the past 9 seasons.
Share
Facebook Twitter LinkedIn WhatsApp Pinterest Email

Cesar Chavez High School has consistently ranked among the elite high school programs in the state of Arizona since it's development in 2004.  Still a fairly new school in the valley, Chavez has posted consecutive winning seasons in each of their 9 seasons of existence in Arizona.  Behind the leadership of their only high school head coach at the program, Gary Lee, the Champions have played like Champions each season - wining more than 20+ games in each season since the school's development in South Phoenix.

While Gary Lee is not often mentioned among the list of elite coaches in the state, his numbers at the program are glaring, as he has consistently won at a high level and continues to produce talented young men for the collegiate ranks.  Last season, the team finished again among the elite teams in the state's most competitive Division-I Class - posting another excellent 29-3 overall record on the season.  Behind the terrific play of 6-foot-6 rising senior forward Pablo Rivas, the future looks to be very bright again this up-and-coming high school season for the program.

Another reason for a very bright future ahead for the program, is a result of the very talented young prospects that currently reside in the Chavez program.  One of the most glaring young prospects at the school that has shown excellent promise as of late is Chavez 6-foot-6 rising junior forward Rashaad Goolsby.

Goolsby is a very long and rangy young talented prospect that has grown physically a great deal over the past year, and now is beginning to show the potential and promise to become another strong prospect for the school.  Just a year ago, Goolsby stood 6-foot-3 in heigth, but this young man grew three inches in the past year and now can be considered among the top young prospects in Arizona's 2015 class.

Goolsby still looks to be growing a great deal as well, so this amazing growth-spurt looks to be just the beginning for the gifted young prospect.  He also still is only a mere 15 years of age, so physical and mental growth for this young student-athlete will continue for many years ahead.  The long, athletic frame of Goolsby looks like it could continue to grow to 6-8 or 6-9 before it is all said and done.

Goolsby growth physically as a player reminds me of a young Zylan Cheatham, who grew at the same rate and had a similar physical build as Goolsby.  Everyone knows what has happened for Cheatham physically over the past two years, so Goolsby, with continued hard work, should also develop.  Just how much he develops will be determined by how hard he works.  Cheatham worked daily to strengthen his body and to improve as a player.  This young man will have to decide for himself just how bad he wants it, but the physical tools are there.

Goolsby also comes from very good basketball bloodlines, which will benefit him over time.  He is a left handed performer also, which makes him a very intriguing prospect as well, with an ability to score around the basket and also from the perimeter.  This will be his best asset for himself over time, as he matures and develops.  Currently, he is not physically strong enough to finish plays at a high level, so he will need to get much stronger to continue to improve as a player.  He is currently a solid mid-range player, but will also need to improve his consistency from the perimeter beyond the arc to improve as a player.

Goolsby is a solid ball handler and is able to handle the basketball in the open floor.  As he gets stronger physically, this area of his fundamental should improve, but he is a skilled prospect with good size for such a young age.  Where Goolsby should excel as a player over time will be in his ability to defend, which he is currently a good shotblocker and has the length to play the passing lanes.  Over time he should also be able to defend several positions on the floor.

While Goolsby has not been a factor yet with the talented Chavez program, next season will look to be his breakout season.  Over the next couple of years this young man should develop a great deal and become a player to watch for the future, as his best years are well ahead of him.