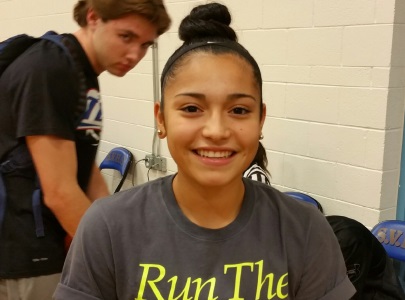 Arizona's top overall girls prospect in the 2016 class is Millennium High School’s terrific 5-foot-7 senior guard Raina Perez.  Perez has made a believer out of everyone in the state of Arizona with her superb play thus far in her high school career.  Here ability to play the game transcends girls basketball, as she competes with boys as well and holds her own.

Perez had considered waiting to see her college recruitment reach new heights, but after considering her options for college basketball Perez realized that she was happy with an in-state program.  On Saturday afternoon, Perez decided to end her college recruitment - giving a verbal pledge to Northern Arizona University and women's head coach Sue Darling.

The 2013-2014 high school basketball season was a special season for Perez, as she did almost everything for the Millennium High School basketball program – leading the program to a strong 27-4 overall record on the season.  As a mere sophomore, Perez would earn First-Team All-State honors by the Arizona Republic.  Last high school season (2014-2015), Perez was even better - leading her high school team to a runner-up state final finish in the Division-I state playoffs.

Congratulations to Perez and her wonderful family on this amazing accomplishment.  Perez is a winner and a joy to be around.  She has a bright future ahead of her.

Arizona Hoop Review Scouting Report:  Perez is a high-energy floor general with a superb feel for the game - capable of making players around her better.  She sees plays develop before they happen on the floor and is quite capable of making a play for herself or others at any time in the game or during a possession.  She has excellent range and a quick release on her shot, and is able to finish plays in traffic against bigger defenders.  Perez is a capable lock-down defender as well, as a result of her lateral quickness and quick hands.  She has very good on the court anticipation, allowing her to beat offensive players to the spot on the floor.  With continued focus in this area of her game, Perez could definitely be a lock-down defender at the collegiate level.   She is an absolute winner and a coach on the floor.  A big-time performer.