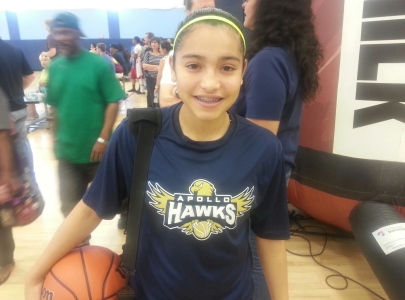 The 2013-2014 high school basketball season was a special season for Millennium High School's terrific 5-foot-7 sophomore guard Raina Perez.  Perez did almost everything for the Millennium High School basketball program this season - leading the program to a strong 27-4 overall record on the season.  As a mere sophomore, Perez would take the state of Arizona by storm and earn First-Team All-State honors this season by the Arizona Republic.

Perez emerged this high school season as a special prospect in the state of Arizona.  While she is only a mere sophomore guard, she has developed into the top overall point guard prospect in the state - regardless of class.  A special talent with the basketball in her hands, Perez is a big-time individual talent with a nose for the basketball, a highly developed feel for the game and an advanced skillset that most top-rated seniors do not have.

This past season, Perez averaged 14.6 points, 3.4 assists and a superb 4.1 steals per/game.  Perez was Millennium's leading scorer convincingly this season and proved that she is among the state's elite individual talents, and worthy of serious national recognition.

Perez is a sure-fire high-major division-I basketball talent for Arizona's 2016 class.  Currently she is hearing from numerous college programs through the mail, and very soon, when division-I programs are able to reach out to her, she will begin fielding phone calls from a large number of college coaches.

Perez is a high-energy floor general with a superb feel for the game - capable of making players around her better.  She sees plays develop before they happen on the floor and is quite capable of making a play for herself or others at any time in the game or during a possession.  She has excellent range and a quick release on her shot, and is able to finish plays in traffic against bigger defenders.

Perez is a capable lock-down defender as well, as a result of her lateral quickness and quick hands.  She has very good on the court anticipation, allowing her to beat offensive players to the spot on the floor.  With continued focus in this area of her game, Perez could definitely be a lock-down defender at the collegiate level.

Perez is currently playing for the Arizona Magic Elite 17U girls program, the first inaugural 17U girls team for the highly successful Magic program.  She will travel with the team this weekend to the Best of the West tournament in California - an NCAA Certified event.  Perez will look to raise eyebrows of many college coaches this weekend.

What is most exciting about Perez is that she has already achieved many honors, and she is still a mere sophomore prospect.  Over the next two years of high school basketball in the state, it could become very interesting for this special young prospect.