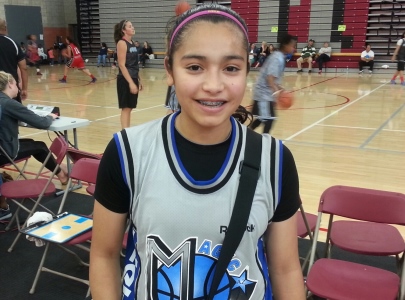 Millennium High School’s terrific 5-foot-7 rising junior guard Raina Perez made a believer out of everyone this high school season, whether within the state of Arizona or not - scouts and media included.  Perez' ability to play the game of basketball at a high level has caught the attention of many people in the basketball community and has placed her name in the minds of basketball enthusiasts as an elite level prospect among the 2016 class.  While Perez has yet to receive a national player ranking, it will soon come for this budding young prospect.

This week, her college recruitment took one step forward as Grand Canyon University jumped on the Perez train and extended an offer to the talented guard prospect - his first official scholarship offer.

The 2013-2014 high school basketball season was a special season for Perez, as she did almost everything for the Millennium High School basketball program – leading the program to a strong 27-4 overall record on the season.  As a mere sophomore, Perez would earn First-Team All-State honors by the Arizona Republic.

A special talent with the basketball in her hands, Perez is a big-time individual talent with a nose for the basketball, a highly developed feel for the game and an advanced skillset.  As a sophomore, Perez averaged 14.6 points, 3.4 assists and a superb 4.1 steals per/game.  Perez was Millennium’s leading scorer convincingly this season and proved that she is among the state’s elite individual talents.

Perez is fresh off leading her talented club team this weekend to a local tournament championship in an nice girl's event organized by Ron Coleman, preparing teams for the summer.  Perez helped to lead her Arizona Magic Elite 17U girls program to the tournament title, and looks to be having her Magic ballclub playing excellent basketball heading into the July evaluation period - period where Perez will look to garner much more recruiting interest.  Perez will travel with her Magic team to Oregon and San Diego in July.

I will continue to keep you updated on Perez' college recruitment and bring you any updates as they continue to develop.

Arizona Hoop Review Scouting Report:  Perez is a high-energy floor general with a superb feel for the game - capable of making players around her better.  She sees plays develop before they happen on the floor and is quite capable of making a play for herself or others at any time in the game or during a possession.  She has excellent range and a quick release on her shot, and is able to finish plays in traffic against bigger defenders.  Perez is a capable lock-down defender as well, as a result of her lateral quickness and quick hands.  She has very good on the court anticipation, allowing her to beat offensive players to the spot on the floor.  With continued focus in this area of her game, Perez could definitely be a lock-down defender at the collegiate level.   What is most exciting about Perez is that she has already achieved many honors, and she is still a mere rising junior prospect.  Over the next two years of high school basketball in the state, it could become very interesting for this special young prospect, as she begins to garner serious college recruitment from the highest level.