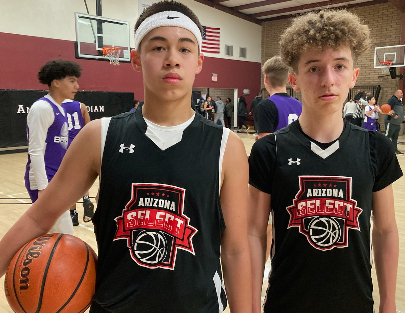 The key to success in any high school basketball program begins with attracting the top younger talent consistently to your school. For Notre Dame Prep, the basketball program is looking to turn the corner, after a strong finish to the 2021 season. Behind the strong leadership and player development of first-year head coach and former Grand Canyon University staff member Luke DallaRiva, the program is headed in the right direction. Now with the additions of top-rated middle school prospects Bryce Quinet and Brennan Peterson, the future looks extremely bright for Notre Dame Prep.

Notre Dame Prep is coming off a strong finish to the 2021 season. While finishing with a mere 9-8 overall record during the COVID-stricken 2021 season, Notre Dame made believers out of everyone, as they reached the 4A State Playoffs - losing to eventual 4A State Champion St. Mary's High School (54-42) in the second round of the state playoffs. In the game, Notre Dame played a loaded St. Mary's team very close, until St. Mary's pulled away in the game's second half. The coaching and game preparation given by DallaRiva to his inexperienced team was exemplary.

The future of the program already looks bright, when you consider that the varsity team will return half of their group from last season, and will be led by the strong play of one of the state's top young talents, 6-foot-3 rising sophomore Anthony Batson Jr. Batson is currently ranked as our #5 overall prospect in Arizona's 2024 Class, and is a sure-fire talent for the future, with an excellent athletic frame, and a strong shooting prowess and ability to play in the open floor. With Batson locked in for the future, Notre Dame Prep would already be very competitive.

Recently, two of the state's elite young talents, rising freshman guards Bryce Quinet and Brennan Peterson, announced that they would both be attending Notre Dame Prep for their high school destinations. Close friends and perennial club teammates throughout their young lives, Quinet and Peterson are a plug-and-play backcourt that should contribute and play immediately at a high level for Notre Dame Prep. Peterson as the point guard and floor general, and Quinet as the high-scoring off-guard. These two young men will make their impacts felt on Arizona high school basketball early and often next season.

Peterson is a tremendous point guard with an excellent feel for the game and a unique shooting prowess as a young top performer. A heady floor general that commands presence on the basketball court, is very efficient in his approach to the game and make plays for himself and his teammates consistently. Peterson reminds me of a young John Stockton, as he has an excellent handle of the basketball, sets up his teammates for scoring opportunities and makes shots at a high and consistent level -rarely seen for a prospect his age. He is very poised as a player, and nothing seems to rattle him on or off the floor. Also a good defender with quick hands, and understand angles on the floor.

Quinet was a scoring machine in the middle-school ranks, as he poured in big scoring numbers in just about every event he participated in. He also can facilitate an offense from either guard position on the court, plays with a very good pace and is an aggressive scorer that shoots the ball with range, and is very strong off the dribble - able to get into the lane and finish and also score in the open floor quite well. He has a good change of pace and speed with the basketball, and looks to always make a play for himself or his teammates when he has the ball in his hands. He has a very good mid-range game for himself - a lost art among today's offensive players. Quinet is a tough prospect that is more than battle-tested and competes at a high level.

Both prospects have had extreme success at the middle-school level, as they have competed in hundreds of games and many tournaments - leading their respective club programs and middle-school programs to many tournament championships and MVP performances (both prospects). Both of these young men are flat out winners, and love the game - playing and competing at a high level and working on their crafts religiously. Very rarely do you see such top-rated talents attend the same high school that completely make up the program's backcourt. The trio of Peterson, Quinet and Batson Jr. is a formidable group for the future of Notre Dame Prep and Arizona basketball.

I am excited about the future of Notre Dame Prep, as these two young men will help take the program to another level - immediately.