Quentin Guliford Coming Into His Own 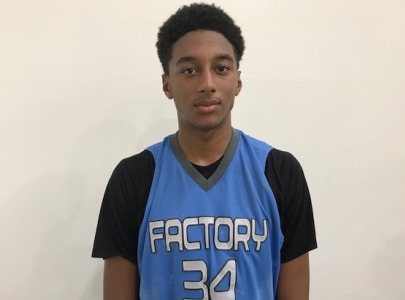 One of the better sleeper prospects in Arizona's 2018 Class has put himself into the conversation among the better prospects in the state.  Liberty High School's 6-foot-5 rising senior wing prospect Quentin Guliford had an excellent showing for himself this spring, and has continued his strong play this summer.

As a result of his recent success on the club circuit, Guliford is beginning to come into his own as a college prospect.  One of the better sleeper prospects now in Arizona's 2018 class, I expect Guliford to continue raising eyebrows with his play this summer.

According to Guliford's club coach with the Arizona Factory, Kenny Mullins, Guliford has heard this week from such schools as George Mason, as he received numerous phone calls after his performance in last weekend's Pangos Sweet 16 tournament in Garden Grove, CA.  In the event, Guliford showcased his length, athleticism and ability to defend several positions on the floor.  His best effort came in a narrow loss to Belmont Shore (CA), when Guliford played well defensively on star guard Bryce Hamilton.  Guliford held Hamilton to a poor shooting performance in the loss.

Guliford's best attributes as a player are his ability to defend, and his unique length and athleticism, which allow him to finish plays at the rim over defenders.  He has a 7-foot wingspan and can slash and finish plays effectively in the open floor.

Last season, as a junior for a talented Liberty team, Guliford averaged modest numbers - 8.4 points and 4.6 rebounds per/game.  I expect these numbers to significantly increase during his final senior season.  Especially if his performance this spring and summer is any indication.

Guliford has yet to receive a scholarship offer, but he is worthy of serious recruiting attention from low to mid-major division-I programs, and looks to be one of the steals of the class.

I will continue to follow the recruitment and progress as a prospect by Guliford throughout the remainder of the summer.  Guliford is currently traveling with his program to Texas to take part in the Great American Shootout (GASO) this week.

Arizona Hoop Review Scouting Report:  Guliford has been one of the best surprise performers of the club season. The athletic wing prospect has an excellent ability to finish plays at the rim, and can score with either hand in traffic. He has excellent length on his rangy frame and plays much bigger than his size suggests. Runs the floor extremely well and is an excellent finisher in traffic. A good shooter from mid-range and a capable three-point shooter. An active rebounder and shotblocker. A solid ball handler and passer. Plays with a high motor. A serious sleeper prospect that will make a smaller college program very happy.