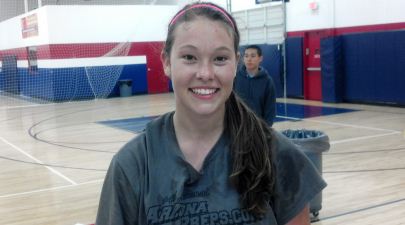 With many girls prospects in the state still unsigned from the 2013 senior class, there will be many prospects for college programs to take a hard look at this high school season, and as part of next spring's evaluation period. One of the better looking unsigned senior prospects in the state is Queen Creek High School's 5-foot-9 senior guard/forward Sarah Hefington.

Hefington is a sleeper prospect in the class and is still someone that many college programs still have not seen play, but she is worthy of some serious attention this season and next spring.

Hefington is not a glaring top-rated prospect that is a no-brainer for college programs, but, as you watch her perform, it is very evident what value she brings to the table for her team.  Hefington has very good toughness as a player and is a glue-player to any team she competes on - capable of stuffing the stat sheet with good overall statistics.  She plays with a purpose and helps teams win ball games.

Thus far this season, Hefington has helped her Queen Creek HS team to a 6-2 start on the high school season.  After winning their first 3 games of the season, Queen Creek suffered two-consecutive losses at the hands of two top-rated teams in Xavier and Arcadia HS.  Since then, Queen Creek has rolled off 3 consecutive wins.

Alongside talented senior Makaily Worthington, who has led the team in scoring and rebounding, Hefington has been the consistent addition that head coach Kylee Bean has needed.  Hefington is currently averaging very well-balanced numbers on the season - 9.1 points, 6.5 rebounds, 3.8 assists and 3.6 steals per/game.  Hefington had a high of 18 points and 10 rebounds in the win over Mingus HS this season, and also collected 7 points and 11 rebounds in the loss to top-ranked Xavier College Prep.

While Hefington is not a big-time scorer, by any means, she is an excellent defender and rebounder that competes very hard and is a joy to play with on the basketball court.  She is able to guard the opposing team's best player and will get under most opposing offensive player's skin.  She is able to guard post players and also is able to slide her feet on the perimeter and defend guards or wings - a nice attribute for herself.  She is also a capable shotblocker and plays with excellent energy on both ends of the floor.

Offensively, Hefington takes high percentage shots on the floor.  While not a volume shooter, she scores around the basket area and is a good mid-range shooter, but will need to continue to add more consitency from the perimeter to increase her value as a player on the offensive end.  She is a solid ball handler and is a very good passser of the basketball with good court vision.

Hefington is someone that is tough to keep off the floor, as she plays with a purpose and helps team win ball games.  She was a big hit by many of our scouts in attendance at this year's recent Arizona Prep Fall Showcase.

Look for Hefington to continue to have a strong season for Queen Creek HS, as this is someone that will make a smaller college program very happy at the next level.