PV Gets Past Rival Sunnsylope In Two Overtimes 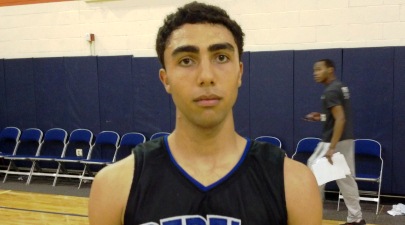 Paradise Valley High School (14-3)  and Sunnyslope (16-3) have been rivals in the sport of basketball for some time now, so on Tuesday evening when these two teams got together it made for an awesome match-up.  With both teams fighting for position among the state's top teams in the Division-II Class, the stage was set for what would become one of the best games of the 2012-2013 high school basketball season.

On the home floor of Paradise Valley, the Trojans would look to gain an advantage on the Vikings, but the Sunnyslope fans would come out in full force - providing a nice atmosphere for both teams to compete in.

Both teams would match one another in the game's first period, until late in the quarter when Paradise Valley would pull away - closing out the period on a 6-0 run, and leading Sunnyslope 16-7 after one quarter.

Sunnyslope would storm back in the second period - going on a 7-1 run of their own, after a transition layup from 5-foot-9 junior guard Navareio Holmes.  After a steal and a layup from 5-foot-11 senior guard Isaiah Cota, as he ripped the basketball from the hands of Paradise Valley's 5-foot-11 junior guard Brandon Williams, Sunnyslpe would tie the game at 19 all with 4:17 left to play in the half.

Paradise Valley's 6-foot-5 senior forward Ryan Finley (Boise State signee-football) would hit his third three-pointer of the game with 3 minutes left to play in the half - giving PV a 22-19 lead.  Paradise Valley would then take a narrow 26-24 lead into halftime.

In the third period, Sunnyslope would look to get things going.  After consecutive baskets, a long-range jumper and then a transition layup, by Isaiah Cota, Sunyslope would take a 30-26 lead with 6:15 left to play in the third quarter.  With 5 minutes left in the period, rapidly developing 6-foot-8 junior post Michael Humphrey would convert a two-handed tip-dunk over a PV defender to put his Vikings ahead 32-29.

Paradise Valley though would go on a 7-2 run to end the quarter - taking a 36-34 lead at the end of the third period.

In the fourth period, Sunnyslope would take the lead back, 40-38, after a three-pointer from Cota.  With 3 minutes remaining in regulation, both teams would remain tied at 42 all, until Humphries would tap in his own missed shot - putting Slope ahead 44-42.

6-foot-4 senior forward Anthony Walker would tie the game at 44 all, after an offensive put-back on a missed shot attempt from teammate, 6-foot-6 senior forward Paul Watson (Fresno State signee).

After a missed shot attempt by Sunnyslope, Paradise Valley would rebound the basketball and hold the ball for one final shot.  Ryan Finley, who had been hot the entire game, would fire a desperation three-point attempt over the outstretched hands of a Sunnyslope defender just before the buzzer - only to see the ball ricochet off the rim and sending the game into overtime.

In overtime, PV's Paul Watson would finally get it going for himself.  Watson would score on a mid-range bank shot to put his team ahead 46-44.

Sunnyslope would come right back on a three-pointer from 5-foot-9 junior guard Ari Stern, putting Slope back ahead 47-46.  After another mid-range bank shot from PV's Paul Watson on the other end, Isaiah Cota would put the Vikings back in the lead, 50-48, after a three-pointer on a curl move from the top of the key.

After a PV turnover, Sunnyslope's Cota would get fouled - sending him to the free-throw line for an opportunity to ice the game with less than a minute to play, but Cota would miss the front end of the one-and-one.  PV would rebound the basketball and get the basketball in the hands of Ryan Finley once again.  Finley would get fouled on a drive to the basket and go to the free-throw line himself.  Finley would connect on both free-throw attempts - tying the game at 50 all with 36.7 seconds left to play.

Sunnyslope would then run out the clock for one final shot attempt, but Cota would miss a three-point shot at the buzzer - sending the game into a second overtime.

In the second overtime period, Paradise Valley would close out the win from the free-throw line, while Sunnyslope would struggle offensively.  The Trojans would score on 4 of 6 free-throw attempts to give themselves a 54-50 advantage with 1 minute left to play.  A long rebound, after a missed shot attempt from Sunnyslope, would lead to an outlet pass to Paul Watson for an uncontested two-handed dunk on the break to ice the victory for Paradise Valley.

PV's Ryan Finley would lead all scorers with 20 points in the win, while Paul Watson would finish with 17 points and   Anthony Walker would contribute 10.

Sunnyslope would be led by Isaiah Cota with a team-high 19 points and Michael Humphries with 14 points and double-digit rebounds.

These two teams will face one another again on Friday evening - this time at Sunnyslope High School.