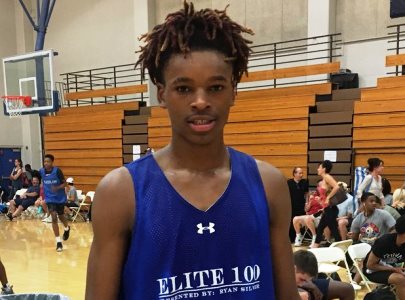 One of the elite younger prospects in the state of Arizona is coming off a big summer performance, which resulted in numerous offers for himself.  Millennium High School's promising young 6-foot-8, 180-pound sophomore forward DaRon Holmes is a big-time future prospect in the state, and numerous college programs have already positioned themselves with the talented budding young prospect.

This summer, after several strong performances in the ASU Team Camp, GCU Elite Camp and also his play during the NCAA evaluation period, Holmes made a lot of noise and became a very hot commodity early in the recruiting process - enough for him to reel in scholarship offers after his freshman campaign.

Holmes would receive (4) big offers for himself from Arizona State, Cal, New Mexico and Grand Canyon.  While many other college programs are now also in the hunt for the talented underclassman prospect, these four schools found Holmes important enough to extend offers already.  Look for many more schools to follow suit in the future, but these offers already are big for such a young performer.

Holmes was big this summer for the Powerhouse Hoops program, as he teamed up with nationally regarded 2022 prospect, 6-foot-10 incoming freshman Dylan Anderson on the Powerhouse Hoops 15U team.  The team was tremendous this club season, and was regarded as one of the elite 15U teams in the country.

Millennium High School is now regarded as one of the elite basketball programs in the state, after a new era began last fall  in their boy's basketball program with the hire of head coach Ty Amundsen.  Amundsen took over the helm, after leaving St. Mary's High School.  The program introduced loads of new and young talent last high school season, and will be a featured program by Arizona basketball enthusiasts this season and for the future.

Holmes is a major reason for the program's resurgence, a member of Arizona's talented 2021 class.  Holmes is a big-time young talent with a very bright future ahead of him - an emerging young star player for the Tigers' basketball program and future.  Holmes played at the varsity level last season as a mere freshman, and had a strong freshman season for himself - averaging 12.5 points, 7.5 rebounds and 2 blocks per/game.  The emergence of Holmes will help Amundsen significantly build something special in Goodyear, Arizona.

Holmes is a very long and rangy prospect that runs the floor like a guard, and enjoys getting out into the open floor.  He is an athletic post performer that is still raw overall offensively, but he has excellent potential and upside for the future.  He is a good shooter with some range on his shot, and has excellent feet and hands.  He will definitely grow much more in the future, and should blossom into an elite high-major prospect over time.

What is most impressive now about the young and talented Holmes, is that, while he is still very young and growing a great deal, Holmes has no fear and is not afraid to mix it up with older prospects in head-to-head competition.  In fact, he takes the action right to them.

At Millennium, Holmes will join forces with rising sophomore guard Justice Jackson, and numerous other talented young prospects to help create a terrific foundation for the future for the Millennium program.  Holmes will be one of the top overall recruiting targets in the state of Arizona for the next several years, regardless of class, and is one of the elite overall talents in the AIA ranks.

I will look forward to continuing to watch Holmes develop as a player, and will look to follow him closely - bringing you updates regarding his play and his college recruitment in the future.

Arizona Hoop Review Scouting Report: Holmes is a big-time young talent with a very bright future ahead of him.  While he is still very young and growing a great deal, Holmes is not afraid to mix it up with older prospects regionally or even nationally.  Holmes is a very long and rangy prospect that runs the floor like a guard, and enjoys getting out into the open floor where he is a good finisher.  He is an athletic post performer that is still raw overall offensively, but he has excellent potential and upside for the future, combined with a very good overall skill level.  A good shooter with some range on his shot - and able to score effectively inside and out.  A good post player with good low-post footwork and very good versatility.  He has excellent feet and hands.  An active rebounder and shotblocker that rebounds outside of his area, and contests and changes shots, while keeping balls in play to set up fast-breaks for his team.  Will grow much more over the next few years, and should blossom into an elite high-major prospect over time.