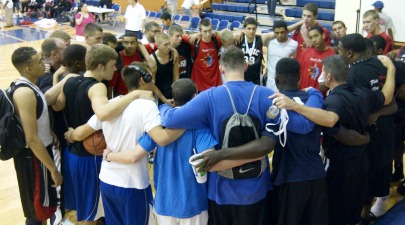 PHOENIX ARIZONA: The Arizona Magic basketball club (www.arizonamagic.org) has been the top high school basketball Club program in Arizona producing (4) NBA players and over (225) college scholarships for their players since 1998.  The Arizona Magic has formed three new partnerships this winter, as they embark on their 15th club season and developed a new growth model for the youths of Arizona to take advantage of immediately.

Double Pump (www.doublepump.com) once again will sponsor the program's top teams with gear (announcing a new Under Armor deal soon) and entry fees.

Arizona Magic’s Director of Basketball Operations, Jeff de Laveaga announced this week, the Arizona Magic will make their new home at the Scottsdale Jewish Community Center (JCC) as a partnership contract was executed last week by both parties.  The JCC features (2) full basketball courts, top notched weight and exercise fitness rooms, Olympic size pool, locker rooms, yoga studio and multiple programs for all family members.  The Magic utilized Gilbert Christian High School as their practice facility the last two-years, and now will move into this health-club setting to focus on developing their players with strength training programs, speed training programs, basketball skills training programs and all the amenities that the state-of-the-art health and fitness club has to offer.

With the new partnership with the JCC, the Arizona Magic are embarking on a new direction, as they will expand from only having high school competitive club teams to an ALL AGE MODEL (U9-U17) - starting immediately.  Already a number of pre-existing club teams have decided to move their team(s) into the Arizona Magic program.

De Laveaga is very familiar with this model, as his Arizona Gym Rats club had (33) teams throughout Arizona for a number of years in the mid and late 2000’s.

Give-N-Go Hoops (www.gnghoops.com) founder Padraig O’Brien and founder of Passion4Ball (www.passion4ball.com) Justin Allen, have aligned their training programs with de Laveaga to bring Arizona kids and parents a single program that focuses on developing skill sets, developing strength and providing a platform that is the most successful program in Arizona for getting kids into college through mutually respected relationships with hundreds of college coaches.

Players who are fortunate enough to participate in the Arizona Magic club program will receive:

*  The most organized club in the state with detail practice plans, tournament plans and workouts

The Magic Basketball Club is now actively seeking U9 through U14 teams as well.  If you are an existing club team that would be interested in moving your team to the Magic program, or an individual wanting to join, call COACH DE at 480.577.0678