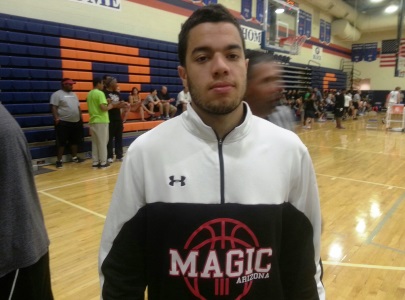 It is very unfortunate that more smaller college programs do not recruit the state of Arizona consistently.  With so many unsigned college prospects available late each year, many of the state's best prospects commonly go unnoticed throughout their high school careers in the state.  One player that definitely has soared well under the recruiting radar is Poston Butte High School's talented 6-foot senior point guard prospect Kyle Davis.

Davis is one of the state's best overall talents and is coming off his best season of play to date.  As a senior this season for head coach Noel Nafziger, Davis teamed up with fellow star performer, Jalen Richard (Santa Clara signee) to make Poston Butte, a newly developed basketball program in the state, one of the state's elite programs.  Davis poured in 20.3 points, 3.2 assists, 2.8 rebounds and 2.8 steals per/contest.  Poston Butte would finish the season with a nice 23-6 overall record in the state's Division-II Class, and would reach the second round of the state playoffs before losing to a tough Nogales HS team (57-59).

As a junior, Davis' numbers were identical as he was just as strong - averaging 18.3 points, 2.6 assists, 2.4 rebounds and 2.4 steals per/game.  Poston Butte's season was also almost identical, as the team finished with a 23-7 overall record on the season and reached the state playoffs - only to fall to a loaded Fairfax HS team in the second round.

Much of the reason that Davis has flown well below the recruiting radar was that he did not play for a high-profile club team during the spring and summer last year.  In an attempt to boost his college recruitment late, Davis played this spring with a talented group of unsigned senior prospects for the Arizona Magic Pump N' Run-2013's.  The team would finish very strong in several events and Davis would be one of the catalysts for the team's strong performances.

A throw-back performer, Davis is a crafty guard prospect that scores from almost anywhere on the floor, and is also able to set up his defender with a variety of cross-over dribbles and step-back moves.  He can score from the perimeter or off the dribble where he is a good finisher over bigger defenders.  He is a strong ball handler that gets his opposition off balance, also using his body well to create space off the dribble.  Davis is also a very good shooter with nice range on his shot, which makes him difficult to defend, but he seems to be at his best when making plays for himself or others off the bounce.

Davis is a good floor general as well, and makes players around him better.  Possessing a high basketball IQ and a nice feel for the game, he makes the pass at the right time and pushes the basketball up the floor to the open teammate - a nice quality for a young point guard prospect.

Davis is a solid defender and has good lateral quickness, although he will need to continue to work on his speed and athleticism to defend much quicker guards at the collegiate level.  As he matures physically and gets on a nice workout regimen, he should gain much more speed and quickness over time.  His feel and ability to put himself in the right position on the floor allow him to make plays for his team - something that will benefit him greatly over time as a player.

Currently, Davis has received strong attention from local junior colleges, but this young man would be a nice find for any smaller college program looking for a consistent perimeter player with good toughness and confidence.  His high school career suggests that he should become an instant contributor for the college program of his choice.

Arizona Preps will continue to follow Davis' college recruitment closely over the next month, and bring you any updates as he nears his college decision for next fall.