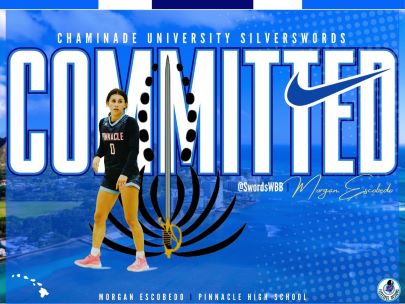 One of the state’s top floor generals commits to Chaminade University (Honolulu, HI). Morgan Escobedo is one of the state’s top point guards in the 2023 class. I was able to see her in action earlier in the season. She is currently averaging 10.8 points, 5.4 rebounds, 4.8 assists and 3.4 steals per/game.

Chaminade got a winner in Escobedo, as she is the coach on the floor for the Pioneers. An athletic talent who defends at a high level, Escobedo utilizes her strength and athletic ability to lock up opposing guards and disrupt passing lanes. Offensively, she can get downhill to finish or dish to open teammates, if the defense collapses on her. She is a matchup nightmare, as she utilizes her IQ to pick apart her opponents, while she can score at all three levels.

There is no surprise that Chaminade University Head Coach Michael Edwards will look to recruit out of Arizona, as he has ties to Tucson and had coaching stints at Flowing Wells and Tanque Verde. Chaminade also has a rich basketball history, as their men’s program hosts the Maui Invitational annually and upset then #1 ranked University of Virginia, led by Hall of Famer Ralph Sampson back in 1982, which is still the biggest upset in college basketball history.

I am very excited for Morgan, as she will be attending a high quality academic institution located less than 15 minutes from the famous Waikiki Beach. Chaminade also shares their campus with National Football Power Saint Louis School, where my cousin Gerald Welch is the Associate Athletic Director. For those of you who don’t know, I have many ties to Hawaii, as that is my home state where I was born and raised. My family and I are now instant fans of the Lady Silversword program, as Morgan is one of my favorite Arizona prospects.