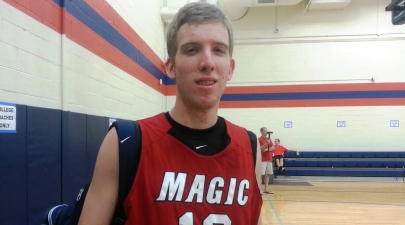 Pinnacle High School came up just short of winning last year’s Division-I state championship last season, after losing a first half lead to eventual state champion Corona Del Sol in the second half of a championship nail-biter.  In the process, head coach Charlie Wilde and his team learned a lot about their group and saw the emergence of a couple key contributors for this up-and-coming 2013-2014 high school basketball season.

One of these emerging prospects during a strong season where Pinnacle finished with a 26-7 overall record was skilled 6-foot-7 senior power forward prospect Ty Griffin.  Throughout the high school season and during a strong playoff run last season, Griffin came up very big down the stretch for Pinnacle HS - holding down the post position for the team and providing interior scoring and defense for his team.  As a result, Griffin developed into one of the better rising power forward prospects in the state.  While Griffin's statistical numbers were not overly impressive last season, his value to the team was great, as Pinnacle was fall just short of winning it all.

Griffin then carried over his strong post-season play into the spring and summer months on the club circuit, while playing for his club program – the Arizona Magic Pump N Run-2014′s.  While playing for his club team, a team that included other top-rated Arizona prospects as Zylan Cheatham, Tate De Laveaga, Rolando Rhymes, Chris Davis and Austin Nehls, Griffin would prove his worth in similar fashion - providing his club team with rebounding, interior defense and an ability to score around the basket.  As a result of Griffin's strong play throughout the club season, the team would finish strong in several events throughout the spring and summer - winning two different exposure tournament championships in the spring, including the Double Pump Hoop Fest in California.  They would also reach a semi-final tournament finish in the Double Pump Spring Classic in Nevada.

After a solid performance for himself this spring and summer, Griffin will now return to a strong Pinnacle HS team that will again compete for a Division-I state championship this high school season.  This time around, Pinnacle will be much improved in the paint, as the team will have 6-foot-10, 245-pound senior transfer Cameron Gilbert added to their lineup this season.  As a result, Griffin will now be allowed to see much of his time as a true, stretch-four prospect for a high school program that will sport one of the biggest line-ups in the state - allowing Griffin a strong post advantage over most opponents that he will face this high school season.

Griffin should benefit a great deal this season from the addition of Gilbert, to a very talented Pinnacle lineup that is among the most talented teams on paper in the state.

Griffin is a stretch-four prospect that has shown a good ability to score inside, around the basket with either hand, and is also comfortable stepping outside to the perimeter, and shooting the basketball out to 15 to 18 feet with a soft perimeter touch.  He possesses good low post footwork and has a variety of low post moves that have developed over the past year.  Griffin is a good rebounder with good overall length of body and does a good job on the offensive end, where he gets good low-post position and is able to get offensive put-backs for his team.  He runs the floor very well in transition and is a good finisher, especially in a state this season where he will not face many players his size and skill level - making for a very productive senior season for the unsigned senior forward.

To improve and prepare for the college level, Griffin will need to continue to add physical strength and size to his frame and become quicker and more athletic off the floor, to finish against much stronger low post players in the future.  Also adding more consistency to his perimeter jump shot will open up things for him inside the paint.

Still uncommitted, like so many Arizona prospects in the state each year, Griffin will have an opportunity to raise his college recruitment a great deal this high school season with a strong performance in his final senior season.  While waiting until the spring signing period, Griffin should benefit greatly in his recruitment as a low-post prospect with size - especially since there are not many available in the West for the 2014 class.

Currently, Griffin is hearing from numerous division-II programs, and I would expect him to land many offers as we progress throughout the spring recruiting period.

Keep an eye out for Griffin this high school season, as he looks to help lead a strong core of Pinnacle prospects back to the Division-I Class post-season, and another attempt at the elusive state championship.