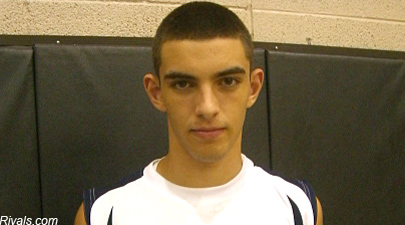 Pinnacle High School (15-6) and Desert Mountain (17-3) met on Monday evening for the first time this season in an absolute war between two of the state's top basketball programs in the Division-I Class.  Not only was this match-up an exciting affair, loaded with talented prospects, but the stage was set in this year's MLK Basketball Classic at Wells Fargo Arena on the campus of Arizona State University.

Desert Mountain (DM) came into the game playing their best basketball of the season - winners of their last 12 games in a row.  Led by the play of superb 5-foot-11 junior point guard Rolando Rhymes, the Wolves were absolutely rolling heading into Monday night's match-up.  Pinnacle HS, on the other hand, while led by the play of two of the state's elite players, 6-foot-4 senior guard/forward Drew Bender (Rice University signee) and 6-foot-4 junior guard/forward Dorian Pickens, came into Monday night's game looking to build some momentum for the season - winners of their last 4 games.

Rolando Rhymes, who has carried a loaded Desert Mountain team on his back at times this season, would get off to an excellent start in the game.  With a Pinnacle defender draped all over him in the first period, Rhymes would go off as if there was no defender guarding him.  Rhymes would score a quick 8 points in the game and give his team an early lead.

With Rhymes on the bench late in the first period, Pinnacle would go on a 6-0 run to end the quarter - taking a 15-12 lead after one period of action.

Early in the second period, Rhymes would have an impressive 15 of his team's total 18 points of the game.

Pinnacle would take a 23-18 lead after a no-look pass from Bender to 6-foot-7 junior forward Ty Griffin for a layup.

But Desert Mountain would bounce back in a big way.  A three-pointer from the wing from 6-foot-1 senior guard Brant Carter, then an impressive 4-point play from sharp-shooting 6-foot-4 junior guard Remy Smith, would allow Desert Mountain to tie the game.  Smith would hit a three-pointer after being fouled on the play.  After a free-throw from Smith, the score would be tied at 25 all.  DM would then take the lead, 28-25, after a three-pointer in transition from Brant Carter after an assist from Rhymes.  Then an offensive rebound and put-back from 6-foot-5 junior forward Jordan Higgins, and a driving layup after being fouled by Rhymes would give DM a 32-25 advantage just before the half.

Pinnacle's Drew Bender would then connect on a three-pointer just before the halftime buzzer to bring Pinnacle to within 4 points - 32 to 28 at the half.

In the third period, Rhymes would pick up where he left off, scoring on another drive to put his team ahead 37-28.  Another driving layup with the left hand and around a defender by Rhymes, and DM would take their biggest lead of the game - 44-36 with 3:50 left to play in the period.

But Pinnacle would storm back into contention as well, after a three-pointer from 6-foot junior guard Trey Ingram.  Ingram's three-point attempt came after a big block from Desert Mountain's 6-foot-6 junior post Mark Andrews on a Pinnacle shot attempt.  After two free-throws from Dorian Pickens, Pinnacle would be down by 3 points, 44-41.

With Pinnacle looking to get even closer to taking back the lead, Remy Smith would connect on another three-pointer from the corner to put his team ahead 47-41.

But Pinnacle would go on a 6-0 run to close out the third period - tieing the score at 47 all.

Rhymes would attempt to keep Desert Mountain in the hunt - scoring on consecutive drives to the basket, but Pinnacle would make their free-throws down the stretch to pull out a 67-62 victory.