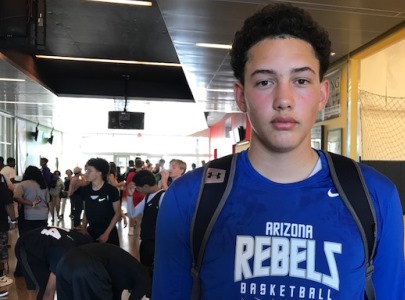 Arizona Preps' staff writer Derek James attended a game this week between Pinnacle and Horizon High Schools.  Here are some players that stood out to James during the game, and his evaluations of each prospect . . .

I see some very good potential with this player as he develops throughout his career.  He has a good body type that is ready for college already.  Based off of his strength and footwork, you can tell he’s still coming around, but, as of right now, he already has a nice touch around the rim.  He has a nice mid-range jumper as well.  I’m not to sure of his overall basketball IQ.  I didn’t see his team run the offense his way at all.  I do know there’s an upside with this player and he will only get better.

A very talented player that has tremendous upside.  A very controlled player with a high basketball IQ.  He has a really good jump-shot off the dribble, as well as an ability to catch and shoot. He’s fast with the ball and can create in traffic. I was in the stands looking at the clock, to see how fast he gets from one side to the other. It took him :04 seconds with the ball in his hand.  In my opinion, that is very good.  He’s a decent defensive of player. It’s not the same as his offense, but he puts effort on both ends of the floor.

Schapira has a big body and is a work horse.  This kid has a legitimate engine that doesn't stop.  I think any program will love his work ethic and know how to use it as well.  He finishes strong around the rim.  He he good hands and feet.  He can also guard the three-point line and move his feet.  I think he’s an hidden diamond for an NAIA program.