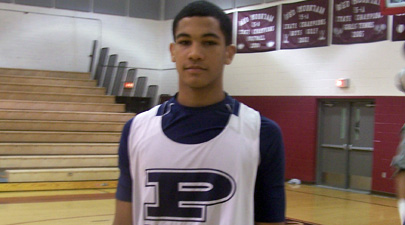 After knocking off #10 seed North HS on the road, and then #7 seed Basha HS on the road as well, Perry looked to be the cinderella team in this year's state playoffs. Riding a serious high into Tuesday's contest, the Puma's would face a Pinnacle HS team that has rolled through each of their opponents this postseason.

Pinnacle (30-3) has been on a tear this season, winning their last 13 games in a row. One of the most talented teams in the state, Pinnacle would get out to a big start in the first half - taking a 32-16 halftime lead.

After a basket by 6-foot-4 sophomore guard Dorian Pickens in transition, on an assist from 6-foot-4 junior guard/forward Drew Bender, Pinnacle would take a big 44-26 lead with 3:12 left to play in the third period.

Pinnacle's talented 6-foot-7 senior forward/post Cody McDavis has been on fire this season. McDavis would convert back-to-back dunks in transition to put Pinnacle ahead 56-36 with 5:40 left to play in the game.

After a timeout by Perry head coach Mark Nold, Pinnacle would not cool off and would eventually win the game, 64-46.

McDavis would finish with a game-high 22 points in the win, while Drew Bender would contribute 14 points and 6 assists and Dorian Pickens would add 10 points and 9 rebounds.

Perry's 6-foot-10 senior post Lucas O'Brien would lead his team with 12 points and 6 rebounds in the loss.

Pinnacle will now face #6 seed Cesar Chavez on Thursday in the semi-finals at Jobing.com Arena.

Playoff Notes: #6 seed Cesar Chavez defeated #3 seed Red Mountain HS, 64-51 on Tuesday afternoon. Red Mountain turned the basketball over 16 times in the first half and trailed 29-25 at halftime. Chavez went on an 11-0 run to end the third quarter, putting the game out of reach.

5-foot-11, 180-pound senior combo-guard JD Reagan led the way for Cesar Chavez with a game-high 25 points, including four three-pointers in the win.