Pinnacle Cruises Past Chaparral On Road 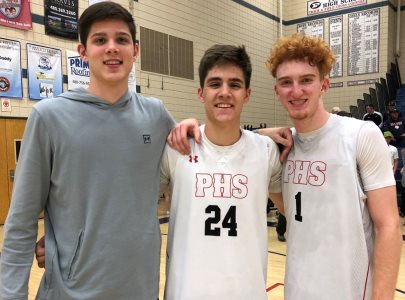 Pinnacle High School (17-3) is gearing up for another state playoff run this season.  After a loss to Mater Dei (CA) over the holidays, a game in which superstar senior guard Nico Mannion (University of Arizona signee) went off for 45 points, the team has now won their last (3) games on the season in fine fashion.  On Tuesday evening, the program would travel to the state's top place to play, Chaparral High School, to take on the host Firebirds in front of a nice crowd.

Every game this high school season for Pinnacle has brought out large crowds, in anticipation of seeing one of the state's elite level talents, Nico Mannion.  While Mannion has been absolutely unreal this season, lately he has been the catalyst for his teammate, 6-foot-1 senior guard Trent Brown to go off.  After posting 43 points and a state record for three-pointers in his team's big win over Liberty High School on Friday evening, Brown would explode for a game-high 34 points in Pinnacle's 75-62 road victory on Tuesday evening.

The backcourt combination of Mannion and Brown this season has been absolutely terrific and dominant in every contest for the Pinnacle program.  Against a Chaparral (15-5) team that is very talented this season, and is knocking on the door of being a contender for a 6A state title, Tuesday night's match-up was an enjoyable one to consider.

Mannion and Brown would do what they have done all season in the game's first half, as they would fire on all cylinders, and give their team a double-digit first half lead over Chaparral.  Both elite performers would contribute 12 points each by the middle of the second period, and it would look as though Pinnacle would start to pull away.  But Chaparral would fight hard to close out the first half in fine fashion, and close the Pinnacle lead.

After a strong drive to the basket in the secondary break by 6-foot-6 senior guard/forward Alec Bryan, in which Bryan would get fouled and then complete the three-point play, and then another strong driving basket by 6-foot-5 junior wing Jordan Josephs, and Chaparral would pull close to Pinnacle, 40-37, late in the first half.

But Pinnacle would come back to finish the first half strong.  Trent Brown would get fouled on a three-point attempt, and after hitting all three free throws, Mannion would close out the first half with a length of the court floater at the buzzer - giving Pinnacle a 45-37 halftime lead.

Trent Brown would lead all scorers with 16 points in the first half, while Mannion would have 14.  Alec Bryan would lead Chaparral with 10 points.

In the third period, Pinnacle would pick up where they left off quickly, as Brown would knock down a long-range three-pointer, and then, moments later, assist Mannion on the break with a lengthy bounce pass, which would lead to a strong, two-handed dunk by Mannion.  Mannion's impressive dunk would give Pinnacle a comfortable 56-43 lead with 5 minutes left to play in the third period.

6-foot-3 junior guard Alem Huseinovic would ignite for a bit, and would keep Chaparral within striking distance.  His consecutive baskets, a three-point play after a strong drive and a floater in the lane, would pull Chaparral within 7 points of Pinnacle, 58-51.

Then with just seconds left to play in the third period, Chaparral would look to take one last shot in the period, before they would turnover the basketball, which would lead to a nice, length of the court transition layup and foul by Pinnacle's Brown.  Brown would turn it into a three-point play - giving Pinnacle a 68-57 lead after three.

In the fourth period, Pinnacle would close the door for Chaparral, as Mannion and Brown would continue their strong play.  After a three-pointer from the corner by 6-foot-2 junior guard Spencer Allen, Pinnacle would take a big 75-62 lead in the game, and would not look back from there.

While Brown would finish with a game-high 34 points in the win, Mannion would also finish with 26 points and double-digit assists.

Alec Bryan, who has had a nice breakout season for himself, would finish with a team-high 17 points in the loss.