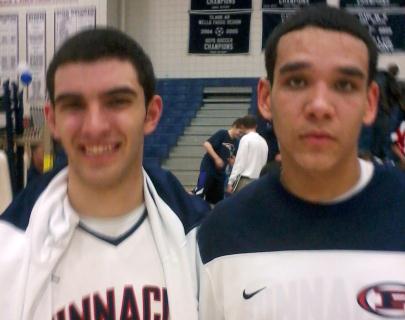 On Tuesday, February 19th I traveled to Wells Fargo Arena (ASU) and watched the second game of the day for the Elite-8 playoffs for the Division-I State Tournament, which featured the #3 seed Pinnacle Pioneers versus the #11 seed Gilbert Tigers. The story before the game was how would Gilbert’s tough defense contain the Pioneers' great offense.  Also, how was 6-foot-5 senior wing Drew Bender’s (Rice University commit) foot doing and would he be productive.

The game started and Gilbert's 6-foot-4 senior wing Tanner Reber grabbed an offensive rebound and a lay-up for the first two points of the game, which would be the last time Gilbert would have a lead.

Pinnacle's 6-foot junior guard Trey ingram would then hit a mid-range shot, followed by Bender with a slick pass to Ingram for two more points - taking a 4-2 lead.  Then 6-foot-4 junior guard Dorian Pickens would convert a put-back for a 6 to 2 lead.  6-foot-5 Lee Andari then would go to work with his left hand for a nice hook shot and an 8 to 2 lead early on.  Ingram then got fouled going for a running lay-up and made 1 for a 9-2 lead.  The next play down, Pickens would catch a ball in traffic from a nice feed from Ingram, after a 6-foot-6 junior forward Spencer Nicolds blow-by, for an 11-4 lead with 2 minutes left to play in the quarter.

Gilbert's talented 6-foot-8 sophomore post Truman Moore finally got in the act and made one free-throw for an 11-5 lead for Pinnacle.

But Bender would hit a deep 3-ball for a 14-5 lead for Pinnacle.  On the next possession, again Ingram made a great move to the cup for a 16-5 lead after one quarter of play.

The second period started with more of the same for the Pinnacle dominance, as the lead would get as big as 16 points - finishing as a 29 to 15 lead at the half.  Dorian Pickens had 8 points and Trey Ingram had 9 at the half for Pinnacle.

The third period started and Gilbert needed to play some serious defense.  6-foot-3 senior guard Conner Helvig started off the half with mid-range jumper, but Pickens matched that play on the other end for a 31 to 17 lead.

Then Truman Moore and Pinnacle's 6-foot-7 junior forward Ty Griffin exchanged baskets down low for a 33 to 19 lead.  Truman would get an impressive “and-1” play, but Pinnacle's Andari got fouled after a questionable call and converted both for a 35-22 lead.

Gilbert's 5-foot-9 junior PG Anthony Bryant had a nice run by himself, with a great pass to Nicolds for a three-pointer, followed by a long rebound and mid-range shot to cut it to a 35-28 lead with 1:30 left in the third quarter.

Then a steal and lay-up for Helvig cut it down to only 5 points, as the Gilbert faithful would go crazy.  But a deep three-pointer by Pinnacle's Ingram would stop the great run by Gilbert - putting his team ahead 38-30 after 3 quarters for Pinnacle.

The fourth quarter started and Pickens got doubled in the post and found Griffin for a lay-up, followed by a 5-0 run by Gilbert for a 40-35 game.  But backup PG 5-foot-9 senior Ken McCormick got a blow-by for a 42-35 game with 5 minutes left in the game.

Pickens then got fouled and converted both, and then McCormick caused a charge on Gilbert's Bryant for a huge momentum swing back to Pinnacle.  Pickens once again found himself on the line - making one for a 45 to 35 lead and quieting the Gilbert fans, as most of the fans were looking up to see how much time was left for a possible comeback.

Nicolds then made a tough basket in traffic for an “and-1” for a 45-38 game - getting the crowd back in it with 3 minutes to go,  followed by Helvig with a clutch 3-point shot after a nice offensive rebound by Valladolid for small 4-point lead - 45-41 for Pinnacle with 2 minutes left in the game.

Pinnacle would push their lead to 7-points, 49-41, after two free-throws from Bender.  Gilbert just kept missing their chances to make a full comeback.

Nicolds grabbed an offensive rebound and drove to the hole for a lay-up with :20 second left to play.  Then Bryant made a meaningless lay-up at buzzer, after two more freebies by Bender, for a 50-45 win for Pinnacle as they would advance to the Final 4.

Bender only finished with 6 points, but his natural leadership on the court was impressive.  Ingram and Pickens finished with 12 points each in the win.

Even though Gilbert lost, the future looks very bright for them next year, as sophomore Truman Moore had 13 points and 6-foot-6 junior forward Spencer Nicolds had 11 points.  In my opinion, Spencer will have a breakout senior season for the Tigers next year.