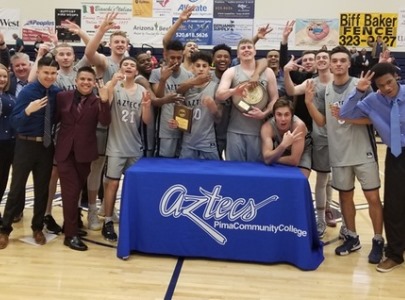 Head Coach Brian Peabody has been a stable in the basketball community for many years.  Whether in the Arizona high school ranks or in junior college, Peabody has been always won at a high rate and done an amazing job at building winning programs with a winning culture.  With an amazing 28 years of head coaching experience, Peabody has compiled more than 400 wins in his career in Division-I, junior college and high school.  In his 6th season now as the Head Coach at Pima, Peabody has led the Aztecs to their 3rd-straight ACCAC Region-I, Division-II Conference Championship.

The championship victory took place on Friday evening after his Aztecs rolled past visiting Scottsdale Junior College in impressive fashion, 107-73.

In the win, Pima (26-6) started the contest going 7-for-7 from the field to blow the game open early.  Pima would build a huge 60-36 advantage by halftime and never look back.

The Aztecs now will advance to the NJCAA Division-II Tournament in Danville, Illinois.  The tournament is scheduled from March 19-23rd and will be held at the Mary Miller Center.

Scottsdale Junior College (20-12) had an excellent season, led by hard-working Head Coach Mark Bunker, who has worked very hard to develop the program, and is coming off his best season to date.  Scottsdale JC stayed at the top of the conference standings all season, before falling in the championship game.