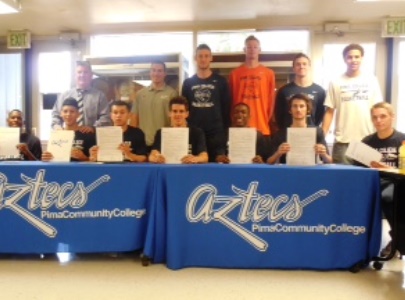 Tucson, AZ – The Pima Community College men’s basketball program introduced seven of its nine players at the West Campus gymnasium on Saturday.  Five signed their letters of intent and two are walking-on to play for the Aztecs starting in the 2015-16 season.

Head Coach Brian Peabody welcomed the honored guests, their family, and friends. He talked a little about each player and what they could bring to the team. The seven new players joined the coaches and current as well as past players for a team photo.

The Aztecs received a verbal commitment from Dakota Kordsiemon, a 6-3, 195-pound guard from Catalina Foothills High School on Friday. He is expected to sign later today.