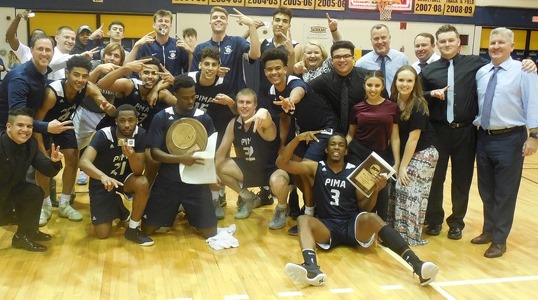 Pima Junior College (28-4), behind the quality leadership of head coach Brian Peabody and his staff, have done it again - winning their second-straight Region-I, Division-II ACCAC Conference Title on the home floor of rival Phoenix College.  As a result, Pima will be advancing back to Danville, Illinois for the NJCAA Division-II National Tournament.

To win this year's conference title, #2 seed Pima defeated the top seeded #1 seed Phoenix College 73-70 on the road, after their pressure defense forced a missed three-pointer and a missed shot in the final seconds of the contest.  With the game tied at 65-65 with 2:47 remaining, sophomore guard Ilunga Moise hit two free throws to put the Aztecs up by two points late.  After a Phoenix turnover, Moise scored two points in the paint to make it 69-65, Pima, then made another pair of free-throws with 1 minute left.

After leading at the half, 33-32, sophomore wing Keven Biggs scored the first 8 Pima points in the second half, as part of a 12-3 run to make it 45-35 with 15:33 left in the game.  After an 8-2 run by Phoenix College, cutting it to 47-43, the Aztecs regained a double-digit lead, 55-45, after sophomore guard/forward Isaiah Murphy hit a three-pointer with 10:16 left to play. The Aztecs never trailed in the second half.

Biggs was named the game's Most Valuable Player after he hit (6) 3-pointers and scored a team-high 26 points.

"We are known for being an offensive team but tonight we guarded," Pima head coach Brian Peabody said. "I couldn't be happier for Keven Biggs.  I really wanted this for him."

Pima will play in the NJCAA Division-II Tournament on March 20-24th in Danville, Illinois.