Pickens Heating Up Heading Into The Summer 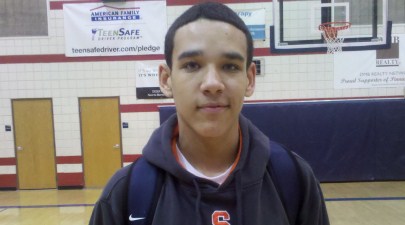 Very few players had as good a performance this spring as Pinnacle High School's 6-foot-4, 185-pound rising junior guard Dorian Pickens.  In fact, very few players in his class on the West Coast had as good a spring perofrmance.  Pickens' play this spring was good enough to garner him attention from many college programs across the country, and also allow him to receive much national attention from scouts and media.

As a result of Picken's spring performance with his club program, the Arizona Stars Elite - coached by Ray Arvisu, he received a Top 50 national ranking among the nation's 2014 class player rankings by many media outlets.  Heading into the summer competition, Pickens has now become a national prospect that many will be watching this summer.

With Arizona's 2014 class of boys prospects looking to become the state's top class of prospects ever, Pickens recent national attention has only made the class much stronger.

Pickens has not indicated a favorite school or a leader in his recruitment at this point in the early recruiting process, but after speaking with Arizona Stars Club President Art Dye this week, he advised me that Pickens likes the idea of going to a program on the East Coast, and that such programs as Syracuse could be a good fit for the gifted rising junior prospect.

As a mere freshman, Pickens helped lead his Pinnacle Pioneers to a 5A Division-II semi-final finish and a #1 ranking in the division for much of the high school season. Pinnacle would finish with an impressive 24-5 record on the season and win the 5A's Desert Valley Region in the process.  Pickens would average 10.4 points, 6.3 rebounds and 1.6 assists per/game - very good numbers for a freshman starter on a well-balanced team.

Last season as a sophomore, Pickens helped his team to a #1 state ranking in the Division-I, Section-III Class for much of the season, as the team finished with a strong 30-4 overall record on the season, before suffering a big upset defeat in the Division-I state semi-finals.  Pickens would pour in 13.7 points and 5.7 rebounds per/game on the state's most well-balanced and talented team.

Pickens is a versatile wing prospect with a good overall feel for the game. He has a good fundamental approach to the game and is excellent offensively, as he possesses a soft shooting stroke with range and a good handle of the basketball. He is capable of playing either the small forward or the shooting guard positions on the floor currently, and is also strong enough off the dribble to play the point position.  While Arizona's 2014 class is absolutely loaded with superstar talent, Pickens is the best offensive player in the class.

Pickens will continue to travel this summer with the Arizona Stars, and will look to capitalize on his recent attention from college programs and media across the country.

Arizona Hoop Review Scouting Report:  Pickens is a versatile wing prospect with a good overall feel for the game. He has a good fundamental approach to the game and is excellent offensively, as he possesses a soft shooting stroke with range and a good handle of the basketball. He is capable of playing either the small forward or the shooting guard positions on the floor currently, and is also strong enough off the dribble to play the point position.  Pickens is also able to play either as the main scoring threat on a team, or is able to co-exist with other top performers - his best attribute.  He does so many things well that he is able to play alongside others in either capacity, while making other players better.  Pickens is a good defender with good lateral quickness, and has quick hands - plays passing lanes.  He focuses much more these days on the offensive end than he does defensively, so a defensive mindset will benefit him a great deal as he heads to a top college program.  He is a very good ball handler and passer already and should only improve his skillsets as he gains more maturity. Pickens also has very good playmaking skills already, as a result of his advanced feel for the game.  Very good early and physically mature for his age.  An excellent prospect that should be able to play at any level of college program.