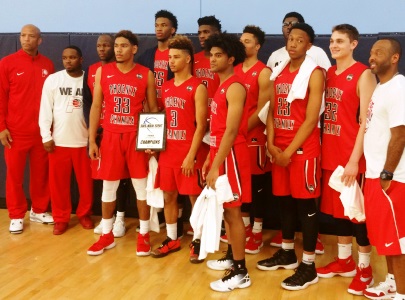 The Southwest Showcase Main Event was held this weekend at numerous locations across the valley and was filled with each of the state's top aau/club programs.  The most anticipated club event of the year always kicks off the club season in the state, while also allowing for bragging rights among the state's top club programs.

Organized by basketball aficionado, Ron Coleman, each of the state's top club programs for the 16U level participated this weekend - providing Arizona basketball enthusiasts with a pre-club season opportunity to see which teams will be the top programs in the state this spring and summer.

While there were numerous teams from the state of Arizona in this weekend's event, in a field of more than 185 different club teams (in all age groups), an Arizona-based club program loaded with players from Arizona and California would win the top division in the 17U age group.

The Phoenix Phamily, led by the superb and dominant play of the nation's premier prospect - 6-foot-11 sophomore forward Marvin Bagley Jr., top-rated 6-foot-9, 250-pound post Cody Riley and 6-foot-1 junior guard Remy Martin would blow past all of the Arizona competition in the event, before facing a talented and determined Arizona Power-Factory team in the tournament finals.  While the Phamily would eventually win the tournament championship with a narrow 66-64 victory, the game would prove to be very close and would end in exciting fashion (stay tuned for tournament top performers).

Everyone in attendance this weekend was excited about catching a glimpse of the nation's top overall prospect, Sierra Canyon HS (CA) 6-foot-11 sophomore forward Marvin Bagley Jr. Since transferring from the state of Arizona and leaving Corona Del Sol HS, everyone has wanted to see the exploits of Bagley, after he turned in an unreal performance last high school season, en route to leading the Aztecs to their fourth-consecutive state title.  After a brief and dominant stint at Hillcrest Prep Academy earlier this high school season, Bagley relocated to California where he now teams up with Riley and Martin on the state's #1 overall team in the country.

In case you were wondering, Bagley has not lost a step at all.  In fact, he has improved - showing off a superb ability to handle the basketball in the open floor and make plays for himself and others.  When he dunks the basketball it looks similar to a nerf hoop, and he also proved to show a very deadly and consistent jump shot with excellent range - making him almost unstoppable and unguardable.  Bagley is comething truly special and being able to watch him perform all weekend up close was a treat.  The crowds that gathered to watch Bagley were something to behold - making a nice atmosphere for this weekend's event.

The Sierra Canyon HS dynamic duo of 6-foot-9, 250-pound post Cody Riley and 6-foot-1 junior guard Remy Martin were exciting and dominant all weekend as well. Both prospects are rated among the nation's elite-level talents, and Arizona basketball enthusiasts got to catch a good glimpse this weekend of what two of the nation's elite prospects, not named Marvin Bagley, look like.

Riley looks like a grown man and looks absolutely out of place against prospects his age.  Riley is a man among boys and he is able to score inside and out, almost at will.  When he makes up his mind to score, he simply overpowers defenders in the post and overpowers defenders on his way to the basket.  Riley has an excellent array of skills, and he is a very nice compliment to the overall versatile play of Bagley.  Martin is ranked among the top 25 prospects in the nation's 2017 class.

Remy Martin is unlike any guard that we have seen in the state of Arizona, as he is an electric guard prospect with a serious motor and sheer aggression.  Martin is tenacious on both ends of the floor and plays with a passion for the game rarely seen.  Martin is among the Top 100 2017 guard prospects in the country.

This will be the last tournament this team competes in before they reach Nike EYBL competition this spring, so having an opportunity to watch them perform this weekend was a treat - for all fans in attendance.