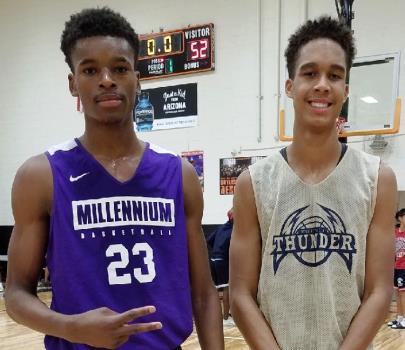 Over the weekend, numerous high school programs gathered together at Skyline Prep in South Phoenix to take part in the 1st Annual Phoenix Fall Showdown. Organized by Event Organizer and former Arizona Preps' staff member Justin Vargas , the event was very exciting and filled with some exciting match-ups and top individual performers from the event. The event concluded in epic fashion on Sunday evening as two 2020 state title hopefuls matched up, Millennium and Desert Vista. It would lead to a very memorable contest that would end with a narrow overtime victory by Millennium, 52-50.

While the game was an exciting one between two of the elite high school programs in the state, the game was really about two players, as Millennium rising superstar 6-foot-8 junior forward DaRon Holmes and 6-foot-9 senior Osasere Ighodaro (Marquette University commit) went head-to-head in would make for an exciting contest.

Rarely do we get to see two players of this size and caliber go at it, which made the match-up even that more memorable. What really made the evening even better for basketball fans was that the two prospects were fully engaged in the game and proved they both have the ability to to rise to the occassion.

DaRon Holmes has quickly become one of the hottest prospects in America, coming off an excellent showing with the USA National Team recently, and already possessing (20) different division-I offers. Recently Holmes has received offers from UCLA and national champion, University of Virginia. Holmes is a winner and seems to push his team to victory every time he takes the floor. He is the state's top overall prospect currently in the high school ranks.

Holmes would play within himself in the game , looking to score as needed, but rather focused on getting his teammates off. Holmes would take the ball into his own hands wheb he needed to, and convert nicely as a result. He would eventually lead his team to a close victory in overtime.

Osa Ighodaro, fresh off a recent commitment to Marquette University, played as hard as I have ever seen him play, in an attempt to lead his team to victory over his program's new rival. While Desert Vista would come up just short in the loss, Osa would convert inside and outside and also show that he can be a playmaker and facilitator when he wants to. He would prove that he will have no problem becoming an immediate contributor in the Big East Conference for Marquette in the process.

These two players left us all wanting for more, as we approach another exciting high school basketball season.

Notes: Ironwood High School was very impressive in the event - finishing with an undefeated 4-0 record in the event and defeating Desert Vista, Paradise Honors, Carl Hayden and Buckeye in the event. Fiery and talented Head Coach Jordan Augustine has built Ironwood into a serious 5A title contender in the state. After finishing with a terrific 23-5 record last season, Ironwood will have their best chance to win this year's 5A state championship as the team is quick, tough, defends and is well-balanced.