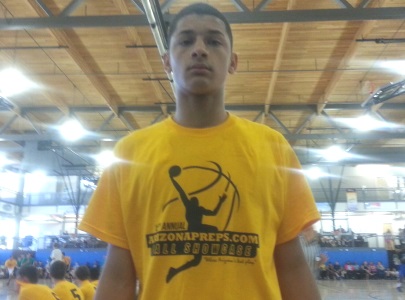 Moore is one of the most unheralded prospects in Arizona's 2015 class, as he put up very impressive overall numbers this season, but received very little college recruiting interest.  As a result, Moore has decided to head the junior college route for next season, where he will spend atleast a year and maybe two seasons developing his skillset and improving his college recruitment.

At Phoenix College, Moore will be playing for terrific head coach Matt Gordon and an experienced staff.  Phoenix College has had tremendous success under Gordon - winning a national championship in 2014 and winning the ACCAC regular season conference title in 2015.

This season, Moore put up ridiculous numbers on the season, including an amazing 47-point game in a win over Trevor Browne HS late in the season.  Moore would average an eye-popping 25.6 points, 11.4 rebounds, 3.3 steals and 3.2 assists per/contest this season as a senior.

"He is the best player to ever play for me," said Independence High School head coach Matt Maragh.

Congratulations to Kaveon and his mother Amber on this accomplishment, and good luck to Kaveon in his college future from our staff here at Arizona Preps.

Arizona Hoop Review Scouting Report:  Moore is one of the most unheralded prospects in Arizona's 2015 class, as he soared well below the recruiting radar as a high school senior.  He is a stat-sheet stuffer as a result of his superior athleticism and knack for the basketball.  An ultra-athletic athlete for his size, Moore plays well above the rim these days.  A high energy and electric wing prospect, Moore can score in bunches and loves to play in the open floor or slash to the basket in a half-court set.  A capable three-point shooter, Moore still needs work on his shooting mechanics and needs to polish up his overall fundamentals for the game.  He is an excellent defender and shotblocker with very good lateral quickness defensively.  A potential lock-down defender at the next level.  OK ball handler and passer.  A very good finisher.  With some hard work refining his fundamental approach to the game, he could become a mid-major prospect.