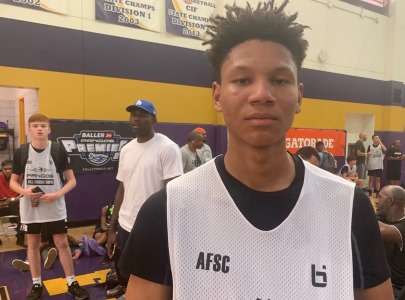 The loaded and exciting Pangos All-West Frosh/Soph Camp took place this weekend on the campus of Lynwood High School in Los Angeles, California. While the event was absolutely loaded with young, talented prospects from the West, surprisingly there were not many Arizona prospects in attendance for this weekend's terrific exposure event.

This event annually has catapulted the recognition and exposure of the top young prospects in the West, and this weekend, two of Arizona's top young prospects were rewarded from their play in the event. St. Mary's High School's athletic and gifted 6-foot-5 junior wing Garrison Phelps, and Basha High School's promising 6-foot-6 freshman forward Landon Schumaker were both selected as Top 50 All-Stars for this well attended event, which featured some of the top scouts, writers and media in attendance.

Phelps showed very good athleticism, versatility and a nice overall offensive skillset which led to his strong performance in the event. Phelps attacked the rim after slashes to the basket in the halfcourt set, and he also finished very well in the open floor. Phelps also showed a nice handle of the basketball and made shots from the perimeter as needed as well.

While playing for a team that was absolutely loaded with talent, Schumaker made his presence felt on the glass and around the basket, as he finished very strong and competed hard around the glass against bigger, more athletic competition. Schumaker showed excellent low-post footwork and an ability to finish against bigger low-post defenders, while also being able to step outside to three-point distance and keep the defense honest.

Both Phelps and Schumaker helped themselves with their perfomnces this weekend, and both prospects made our state proud with their selections for the event, which included more than 200 participants.