Phelps Going To Another Level 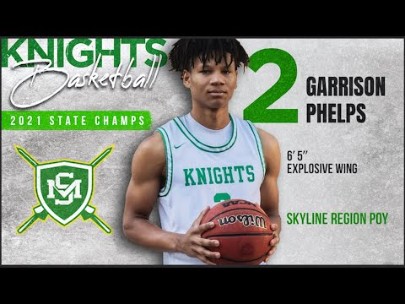 Another top performer this spring and early summer from Arizona's 2022 Class of prospects is St. Mary's High School's ultra-athletic 6-foot-6 rising senior wing Garrison Phelps. After a strong junior season performance where he helped lead his Knights to a 4A State Championship, Phelps has not slowed down a bit - turning in consistent strong performances all spring and now summer. Phelps has risen to another level in his play, which should make him one of the most sought after recruiting targets in the class this summer.

Phelps has yet to see his college recruitment officially take off, as a result of the COVID-19 pandemic, but Phelps is making up quickly for lost time, as he has turned in numerous strong performances on the club circuit this past spring, and also over the past two weekends in the Section 7 Event. Most importantly, his play over the past couple weekends in front of a large contingent of college coaches has shown many different Division-I coaches at different levels just how athletic he is, and how much his overall skill level has improved. Phelps has made shots at a high level and consistently over the past two weekends, which has been very impressive for him, and should benefit him nicely overall in his future college recruitment. Phelps has been one of the elite overall performers in the event.

Currently, Phelps is one of the most under recruited prospects in Arizona's 2022 Class, when you consider his size, level of talent and athleticism. He has received offers from Montana and Missouri State only at this point, so I expect him to begin to reel in many more offers now that so many coaches have had a chance to see him in person. Regardless of from what level, this young man deserves a host of offers as a result of his ability to finish, make shots and the high motor that he plays at. I would expect a big summer for Phelps in July.

Phelps has grown a great deal physically over the past two years that I have observed him as a player.  He has now grown to 6-6 in height and continues to get stronger physically, and is an ultra-athletic wing prospect that can make plays from anywhere on the floor. He plays well above the rim these days and is a highlight reel performer, either in transition where he is now as good as any prospect in the state, or while slashing to the basket in the half-court set. He will only will get much more impressive physically over time. Phelps has really improved in his ability to make shots from anywhere on the floor, as he has improved his ball handling and ability to make shots consistently from longer ranges on the court. His play-making ability is also much improved, according to St. Mary's Head Coach Damin Lopez, and he has become a catalyst for the Knights' future offense, as much of the offense will go through him.

Look for Phelps to continue to flourish this July as college coaches begin to follow him. He will be traveling this summer with the Arizona Supreme travel program, and will compete in the Pangos Sweet 16 (July 9-11), Great American Shootout in Dallas, Texas (July 16-18), and the Big Foot Hoops Las Vegas Classic (July 21-25).

I will continue to follow Phelps' college recruitment closely this July, and bring you any recruiting updates as they continue to develop.