Pharoah Compton On The Rise 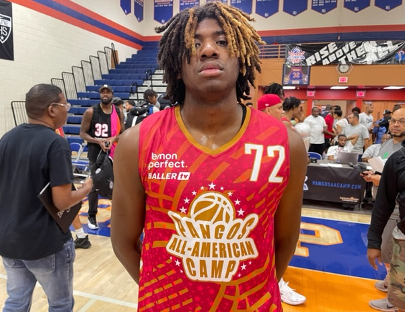 One of the nation's top 2024 prospects now resides in Arizona @ one of the nation's premier prep programs - AZ Compass Prep. AZ Compass Prep has retooled again and will be among the most talented prep programs in the country again, especially after the addition of 6-foot-8, 215-pound rising junior forward Pharoah Compton to this season's roster. Compton is a superb talent with an ability to dominate the paint through his relentless activity, rebounding and finishing ability. He is coming off an excellent spring and summer performance, and is on the rise among the nation's top prospects in the 2024 Class.

When it was first announced that Compton had decided to transfer to AZ Compass Prep, leaving Las Vegas, Nevada, I had no idea of what was coming to our state. While announcing the games at this year's amazing Pangos All-American Camp in June @ Bishop Gorman High School (NV), I caught my first glimpse of Compton in the event. Immediately, I was drawn to this young man's unique ability to play the game. His tremendous length of arms and finishing ability over defenders at the rim, as well as his overall motor, were glaring attributes that stood out immediately. Compton was one of the top overall performers throughout the camp, and amidst some of the nation's premier talent. It was obvious what AZ Compass Prep was getting in Compton, after his terrific Top 25 All-Star performance in the camp.

Compton then competed on the Nike EYBL circuit in the E16 Division this summer and raised many eyebrows with his performance. Enough to receive offers now from LSU, Texas A&M, Washington State, Arizona State, Loyola Marymount, Ole Miss and UNLV. I expect many more offers to be extended his way over the next (6) months, as more programs learn more about him. This young man is an elite talent at the four position, and will become a household name this prep season.

Compton is a relentless rebounder that plays with a nice motor and is a strong finisher at the rim. He has excellent length of arms and broad shoulders, which allow him to rebound at a high rate and finish over and around defenders on put-backs. He is a strong target for guards around the paint, and finishes with authority after the pass. He runs the floor very hard and gets scoring opportunities, as a result of his ability to run the court and gain good low post position. Runs rim to rim. A good shooter from mid-range that can catch, turn and face his opposition, and make plays at the rim, off the dribble. Gets to the free throw line quite often, and is a good free-throw shooter. He will develop offensively over time, but he has a nice skillset already that compliments his activity as a player.

Compton will gain loads of attention this prep season, while anchoring a very talented lineup for AZ Compass Prep, that will have a lot of new faces. Compton will be a consistent top performer for this year's group, and should become one of the hottest 2024 prospects in the country as a result. College coaches need to get on this one now.